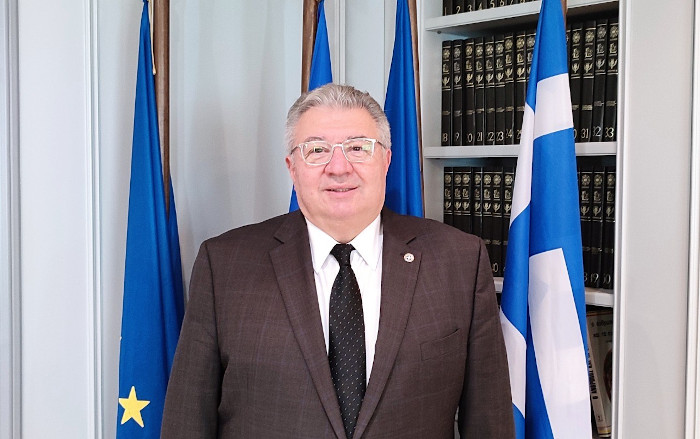 John Chrysoulakis: Greece Fights Anti-Semitism Through “Education and the Power of Example”

In his interview, the Secretary General for Greeks Abroad and Public Diplomacy emphasized the role of education in combating Anti-Semitism and the systematic international efforts and actions by the Greek state in this field:  The annual Presidency of the International Holocaust Remembrance Alliance (IHRA) was taken over by Greece on the 1st of April 2021 and its central theme was “Teaching and Learning About the Holocaust: Education for a World With No More Genocide”.  This effort had as its core humanitarian education, and the strong belief that educating the younger generations based on the principles and values of tolerance and anti-discrimination, while also keeping the historical memory alive, constitutes the main weapon in the fight for a world where the “Never Again” motto will become true. Mr Chrysoulakis also mentioned that Greece has been the first EU state to adopt and legislate the IHRA’s Working Definition on Anti-Semitism and on Holocaust Denial and Distortion, in November 2019.

He also underscored the importance of the “Righteous Among the Nations” event honoring Zakynthos Mayor Loukas Yiorgios Karrer and Metropolitan Dimitrios Chrysostomos who saved the entire island of Zakynthos from the Holocaust during World War II. The event was hosted last January ahead of International Holocaust Remembrance Day.

Mr. Chrysoulakis also noted that the Greek state remains consistently active by making significant efforts to support the Jewish communities in Greece, in their effort to preserve and present their long, rich and painful history, through numerous cultural activities.

Secretary General Mr Chrysoulakis referred also to the strong bonds and cultural underpinnings of the Greece – Israel relations and the traditional ties of friendship between the peoples of the two countries, as well as to the growing trilateral cooperation between Greece, Israel, and Cyprus.

He also underscored the common values and traditional bonds between the Greek and Jewish Diaspora worldwide and their common cause for the promotion of human rights, freedom, tolerance and Democracy. Diaspora communities exercise a distinct form of cultural “soft power,” which can be mobilized for advancing these causes, he noted.