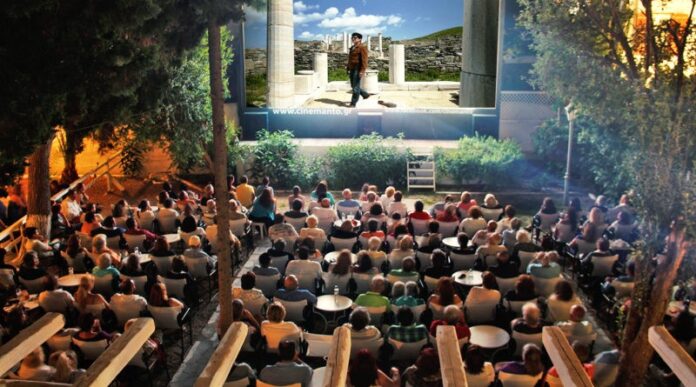 With much more to offer than just another screening, one will be amazed when discovering this little piece of paradise that lies in the center of Chora.

“Cine Manto” is a unique enormous garden, open to the public, sheltered from the wind and always cool, drowned by trees and unique species of cactus, it certainly consists of an unexpected picture of Mykonos. It ia an open-air cinema-restaurant that acts as a shelter from the sometimes bustled and energetic lifestyle of Mykonos and is consisted to be a sort of fortress of cool for tourists and locals during the Summer-time.

If anyone is seeking to grab a bite, relax, watch a movie, or have something refreshing to drink then Cine Manto Mykonos is the place to go; a picturesque oasis of tranquility and beauty. The Cinema’s exotic theme and soothing atmosphere are few of many attributes, but it is equally famous for its delicious food and occasional bouzouki performances that take place in its garden. A meal under the starry sky surrounded by palm trees and Traditional Greek music in the background makes Cine Manto truly a mystical experience. As for the food, a variety of delightful dishes and drinks are offered from dawn to dusk such as smoothies, colourful fresh salads, greek breakfast, multi flavored coffees, and Manto’s infamous barbeque dinner; all of them prepared with a special Greek twist. It is also suggested to take some time to admire the numerous art pieces it displays, like the puzzling sculptures that lie in the cistern, or the beautiful paintings that decorate the walls.

At night-time, the cinema opens its gates with two movies back to back, so one could grab a meal at the restaurant and be just in time for the beginning of the preview. After wandering around and sightseeing on the Island, to watch a movie under the bright stars of the Greek summer sky is definitely the perfect way to end a day (and -in any case- a once in-a-lifetime experience). It is important to mention that the cultural aspect of Cine Manto doesn’t confine itself to cinematic previews, as the Municipal Gardens are also known for hosting numerous cultural events throughout the years.

Due to the artistic touch of the aclaimed film director Andonis Theocharis Kioukas, Cine Manto Mykonos offers a spectrum of cultural acts non compatible with mykonian vibes. From alternative Fashion shows, to Art presentations, Musical performances, Gastronomical exhibitions and Dancing Lessons, it could be considered as an intriguing Multispace with many exciting attributes. It also organizes one of the most special events of the Greek Summer: a Full-Moon concert that takes place in the sacred island of Delos, the richest and most extended archaeological site in Europe. The concert has been considered as a summer custom over the years, as locals and tourists blend in together once a year, for one magical night of music under the Aegean stars.

A Mystic Shelter A meal under the starry sky surrounded by palm trees and Traditional Greek music inthe background makes Cine Manto truly a mystical experience. As for the food, a variety of delightful dishes anddrinks are offered from dawn to dusk such as smoothies, colorful fresh salads, Greek breakfast, multi flavored cof-fees, and Manto’s infamous barbeque dinner; all of themprepared with a special Greek twist. It is also suggested to take some time to admire the numerous art pieces it displays, like the puzzling sculptures that lie in the cistern,or the beautiful paintings that decorate the walls Ethereal Beauty With an ethereal and soothing atmosphere, like an open gate to a beautiful Oasis, it is a once in a lifetime experience for anyone who visits the Island of Mykonos. As the wind whistles through the beautiful palm trees, and the stars shine above the cool open air gardens at night, one could watch up to date movies, dine in a classy restaurant, or just grab a delicious souvlaki stick for the road.

Good quality food and descent prices are guaranteed, and the service is always efficient, even when it comes to just asking for directions. Who could ever imagine that in the middle of such an international Jet setting Island like Mykonos, lies this little piece of heaven on earth? As you are just passing through its garden, the ambience gives away the feeling that you are witnessing something beautiful, something magical that you want to be a part of.