Tales of Sitar:  Premiere at the Apollo Theater in the context of the Institution “Syrian Culture 2021”

The dance theater repertory “Metamorphosis” presents the musical-dance-theatrical performance “Tales of Sitar” in the framework of the Institution “Siros Culture 2021” at the historic Theater “Apollo” on 3-4-5 September 2021.

TALES OF SITAR combines sounds, images, movements, words, rhythms and visual art in transporting the spectator to the marvels of the Far East – transcending the dimensions of time and distance.

A musical adaptation of the West in India: an enriching quest which surpasses limitations, through the whisper of mysticism and the inner journey of the Soul, following the paths (Ragas) of Indian Classical Music. The immersion of Western culture in Indian precepts and traditions, concocts a new multicultural lens that serves to expand the inner personal worldview of the audience. Our tool is music and performing arts. Our sculptures are not only part of the scenery, but stand as an art exhibition in their own form.

Each of the Ragas is an evocative symbol of the natural elements and a means to travel through space and time. Reflecting emotions, sensations and images, the Ragas echo as imprints in the mind and the soul.

« TALES OF SITAR” composes an invisible, etheric painting, a narration of sound, vibrations, phrases, rhythms and colours where our imagination can create the reality that it deserves.

Along with the performance, an exhibition of 30 sculptures created by Takis Loukatos entitled “Tales of Sitar will take place in the foyer of the Theater. 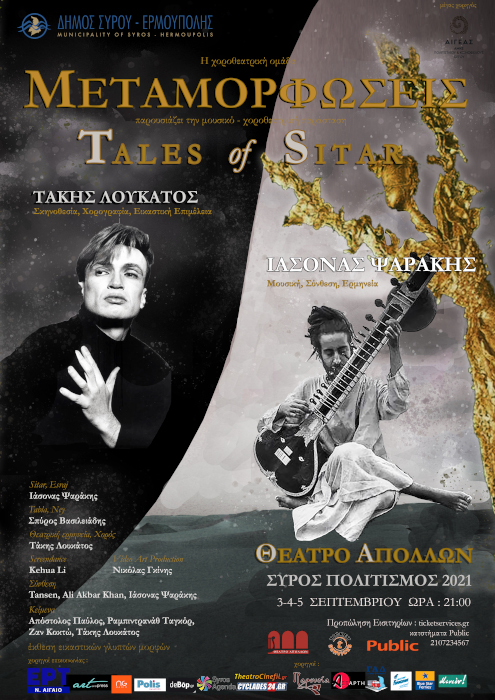 Iasonas Psarakis is a Greek-born composer and musician of North Indian Classical and World music, solist of Sitar, Esraj and many other world music instruments, presently based in Santiniketan, Kolkata, India.

He graduated from Sangit Bhavan – Visva Bharati University (BMus-HCM-Sitar/performance arts, final grade A+) and is a holder of scholarships under ICCR India along with 4 other Indian Merit scholarships.

Iasonas published his first album “Clay” (2014), a music album which was recorded in Lebanon with elements of Indian Classical Music and sounds of Iran.

Iasonas is also the founder and composer of musical art project “Iasi Ensemble” whose first music album includes collaborations with esteemed musicians and artists from Iran, India, Greece and China. It is currently being produced by Nikolas A Gkinis .

He is also a part of the musical “Hellenic Traditional Project”, produced by Nikolas A Gkinis.

Takis Loukatos is an actor, choreographer, dancer, visual artist, director and playwright who has participated in the theatrical and dance performances of internationally-acclaimed troupes and companies.

He is the first to deal with the doll in its artistic form, personifying famous personalities (Melina Mercouri – her doll was in the Cultural Office of Greece, now Melina Mercouri Foundation – , Elizabeth Taylor, Marlene Dietrich, Greta Garbo, Maria Callas , Aliki Vougiouklaki, Marika Kotopouli). In the same vein, he transformed the dolls into sculptures, expressions of his own artistic character, and showcased in 35 exhibitions in eminent galleries in Greece and abroad.

In 1997, encouraged by Alexis Solomos and Vera Zavitsianou, he created the dance theater group “METAMORPHOSIS” with the aim of marrying three art forms through the aesthetics of his sculptural forms. The troupe made its first appearance at the Municipal Theater of Piraeus the same year, followed by an exhibition and dance performance based on the solo works of Jean Cocteau. He added his own layers of artistic depth to these original performances, presenting them in the Ermopoulia Festival (Apollon Theatre) in Siros Island, before being exporting the exhibition and theatrical play in Milan, Venice and Monte Carlo. METAMORPHOSIS also represented Japanese company Marumi in a theatrical piece with an exhibition of sculptures in the Peace and Friendship Stadium in Athens in 1999.

He took on scenography for the Paralympics during the Olympic Games in 2004 in Athens.

He has since directed, choreographed and edited the visual scenography of several performances. Since 2006, he has been teaching dance and theatre in art schools.

He has long played around with writing. ASTARTI publications published his first book “Recalling a Pose” in 2019, a theatrical prose which retraces the life and work of Oscar Wilde.

He is also known to be the first theatre actor in Greece to perform nude, in the theatre play ‘Sodom and Gomorrah’ (Giraudoux Jean) under the direction of Dimitris Kolatos.

He received 1st prize for directing and choreography from the Thessaloniki Concert Hall for his work in the « Magic Flute ». He was granted an Excellence award from the Ministry of Education for his play “The homeland is in children’s faces”. His dance theatre group METAMORPHOSIS has also received the Hermes Award within Ermopoulia Festival.

Spiros Vasiliadis is musician of Indian Tabla , who has been pursuing music since childhood.

He has been learning tabla under his guru, Shankartal , since 1989. He studied Classical guitar from Ahmed El-Salamouny . He studied music education in P. Palos College in Munich (1987-1991).

He has attended several workshops of musical instrument making in Greece and abroad. From 1987, he has chosen music as a profession and is a member of the Panhellenic Music Association and Instrument Making Association.

Lico is from China Jinan .She started to dance at the age of 3, studied Chinese Classical Dance and Folk Dance before the age of 20, and then entered the dance group as a full-time Contemporary Dancer for 6 years. During the full-time period of regiment, she participated in a total of 30 large, medium and small works, and 5 personally created works, all of which were theater performances. She got in touch with ballet training, yoga, tai chi, Butoh and study toured to Israel and Paris. After leaving the dance group, in addition to the theater creation, she began to turn to the cooperation of independent art projects. Currently she is traveling around the world. She focuses on Chinese and Western cultural exchanges and cooperation, hoping to promote the integration and mutual influence of different art categories. Her work involves dance, painting, music, sculpture, vision, video and environmental art.

Nikolas A Gkinis is a Music Composer, Music and Media Producer (radio-television-advertising).

As responsible collaborator for track music for all stadiums (project manager)

For the track-music of Olympic Games, in all Olympic stages of Athens and province in “” ATHENS 2004 ‘ ‘.

He has written original music for the Media, the cinema, for theater and dance productions. One of his most notable works include the composition of the musical score for “Photographers” the latest film by NIKOS KOUNDOUROS. It was released on CD and has been described as a musical journey to the East.

He set up and designed his personal studio as a new place for musical expression where -as a music composer and producer- he specializes in instrumental world music, collaborating not only with Greek but also with several other musicians and producers from all over the world.