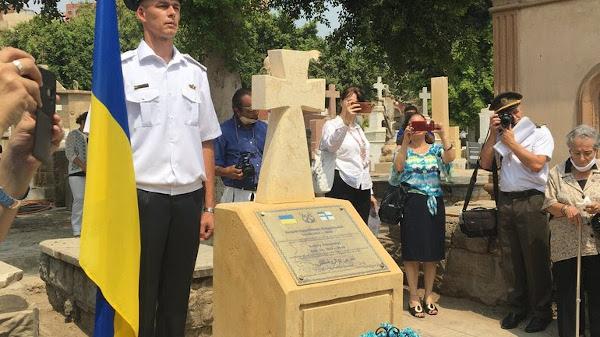 On August 28, the day when Orthodox Christians celebrate the Feast of the Dormition of the Virgin Mary, a cross and a memorial plaque in honor of Admiral Andriy Pokrovskyi was unveiled at the cemetery of the Monastery of St. George in Cairo (Egypt).

His Beatitude Pope and Patriarch of Alexandria and All Africa Theodore II and the V. Rev. Archimandrite Damaskinos Al-Azrai held a solemn liturgy that day. The ceremony was attended by Ambassador Yevhen Mykytenko, diplomats of the Embassy of Ukraine in Cairo as well as representatives of the Ukrainian and Greek communities of Egypt and invited Egyptian citizens.

Colonel Oleksandr Chernov, the Military Attaché of the Embassy of Ukraine in Cairo, addressed the audience with a speech on this occasion.

Andriy Pokrovskyi (1862-1944) – was the builder of the National Fleet of Ukraine in 1917-1918, Admiral, Commander-in-Chief of the ports of the Black and Azov Seas, Minister of Maritime Affairs of the Ukrainian State. Since 1919, he lived in exile in Bulgaria, Austria, and Belgium. In 1938, he moved to Egypt and lived in Cairo, where he died in 1944.

“He designed and implemented the development program of the Ukrainian Fleet, established its headquarters in Odesa, created a minesweeper brigade that cleared the Black Sea from mines, returned Ukrainian ships captured by German and Austro-Hungarian command, and created the Marine Coast Guard. These are just a few achievements of Admiral Pokrovskyi, – says a member of the Scientific Society for the History of Diplomacy and International Relations, Professor Larysa Levchenko, who has been doing research on life and legacy of Andriy Pokrovskyi for several years.

Admiral Pokrovskyi stood at the origins of the Ukrainian National Fleet and was its true creator, contributing to Ukraine’s statehood and defense capabilities. Ukrainians will always keep good memory about him.