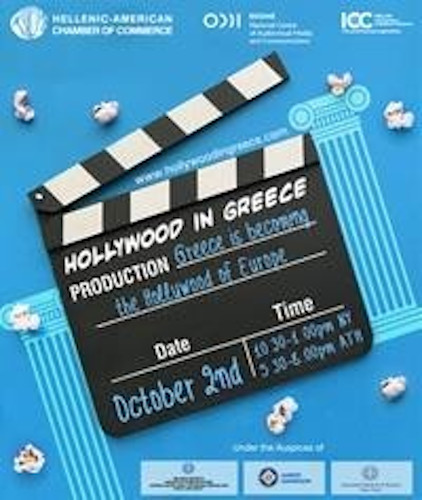 The Hellenic-American Chamber of Commerce and the International Chamber of Commerce Greece in collaboration with EKOME is proud to announce the online virtual Forum “Hollywood in Greece”. The online broadcast will take place on Saturday, October 2nd, 2021 at 10:30 am NY.

Under the Auspices of: Hellenic Republic Ministry of Foreign Affairs General Secretariat for Greeks Abroad and Public Diplomacy, City of Athens, Consulate General of Greece to New York.

Presentations will be made by Panos Kouanis, President and CEO of ΕΚΟΜΕ on Investment Incentives in the Domestic and International Audiovisual Industry followed by Kostas Bakoyannis, Mayor of Athens on the Athens Film Office and

Panel discussions with producers’ and actors’ perspectives and their experiences filming in Greece (what they are looking for from the Greek film industry in terms of infrastructure, film crews, locations and cooperation from local authorities).

Greek film studio owners will discuss what is available to members of the international film industry who would like to produce in Greece, as well as an overview of the Greek film industry’s development in recent years and its prospects for the future.

Moderators of the Forum: