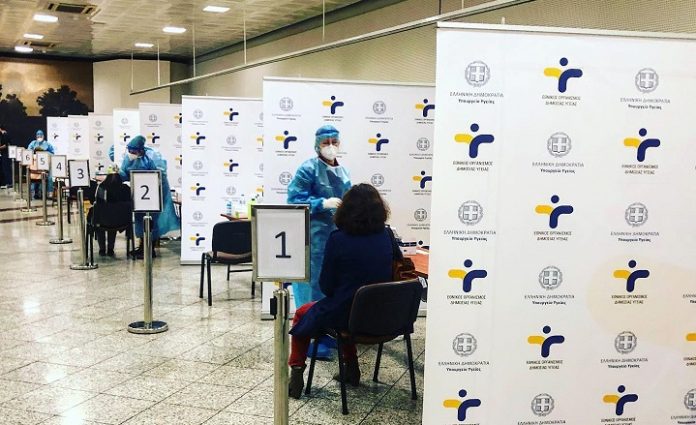 On July 6th, ekathimerini published this article , explaining that “free covid testing” is allowed at Syntagma square and another 134 testing locations around Athens. The reality is, sadly, far less simple or positive… especially seen through the eyes of the diaspora. Eyes like mine.

Now, allow me to begin with a simple observation: if there truly are 134 free testing locations in Athens, I do not know where they are, and neither does a simple internet search. The only one I was privileged to see in my one week in the Greek capital was in Syntagma, in the metro station. Every single day, the queue for it went around the entire station, following all four walls and through the entire archaeological exhibit. In this, Athens differs from places like Paris, Vienna and Berlin, where it is simple, and even ubiquitous, to find out how one can be tested.

But it gets worse.

Having noted the long queue, I decided to make sure I -could- actually get a COVID test there before actually waiting the clearly necessary hours. So I walked to the front and asked.

The reply, to its credit, was easy to get:  there was a sign next to the door that explained -essentially- that to get the test, you have to present your AMKA and access the results via your TaxisNet. In other words, use social security numbers and national log in credentials, which only Greeks living in Greece, and/or recent émigrés, typically have. This may and should change, but in the here and now, it is simply how things are.

“Excuse me.” I asked the security guards. “What does one do when one does not have these?”

“Oh”. They said, nicely. “Well then you have to write an email to this address here. You should enter your name and email, and you will get a reply in a matter of days.” The man looked me square in the eye “and please understand that when I say days, I do mean more than one”.

Days. For a Rapid test result (and not a PCR test). When you need to fly and present a test no less than 24 or 48 hours old.

This led to a frantic internet search for a diagnostic testing center.

Had I been a tourist, I might have used the Visit Greece app (for (IOS) or (Android)), and seen a map of diagnostic centers. But perhaps out of personal hubris, it would never have occurred to me to use an app for the country of my birth, whose language I fluently speak. I don’t think I am the only member of the Greek diaspora who would feel that way.

On the open web, I did find a few testing centers… and all but one reported being absolutely full, with results to be given “a few hours later”. In other words—it was difficult to feel any confidence that the matter would be resolved by the time one needed to be at the airport.

In the end, of course, it all came through for me—because the one and (in appearance) only testing center one could absolutely count on was the one located directly at the airport. It might have been twice as expensive as any other private test, but it got me on the plane out and that is all there is to it.

I have since heard all manner of ridiculous excuses. The most shocking of them, perhaps, was “please remember that this is Greece after all!” Followed by “Free testing is for taxpayers only!”

I wish I could be generous about this, I truly do. But here is the thing:

Firstly, non-locals are not prevented from accessing the free testing. They simply have to jump through a lot more hoops to get the result. While the right is the same, the implementation is problematic, and… discriminatory against guests. Many of whom are Greek passport holders.

But beyond this, one must wonder: what exactly is the purpose of a covid-19 test that one gets results for with so much delay? How many people could one hypothetically infect in the meantime?

Now, the Greek diaspora is very used to answering complicated, excessive-seeming requirements that make little sense. But what about the tourists?

One must marvel that so many in Greece ignore their own language. It is a pandemic. The word is Greek. The prefix pan- indicates that COVID-19 affects everyone, not just Greek locals. It is a bit late in the pandemic to have to explain that we are all in this together. Testing can’t be excluding anyone, anywhere, any way. Greece is happy to take the currency of tourists coming to visit, and indeed needs and deserves it. Creating a system that essentially excludes them, either because testing is hard to find or because you have to wait 3 hours to get to the front of the queue before you discover the emails-that-take-days… This will hurt the country, sooner rather than later. And it would be so simple to solve, by getting a QR code for people to scan before they stand in line.

With this in mind, it should be no surprise to hear that covid-19 numbers in Greece are not good. The country registered 235 infections on June the 27th. The number doubled to 563 on the 29th, doubled again to pass 1100 on the 3rd of July, and that doubled again to pass 2,000 on July 6th, around which is has -fortunately- since hovered.

Still. Can this continue without Greece being declared a “risk” or “risk variant” area again, with the obvious consequences it will have on the health and economy of the country?

Now, I am not going to argue that poor tourists are faultless. When I made it to the airport later on that day, the queues were long, and only half the people on them wore masks, most of them below their noses.

While waiting in line, I very politely asked airport security to remind all these other people standing right next to un-vaccinated kids that masks should be worn over the nose and mouth.

Airport security stared at me, tugged at the mask they were wearing over their mouths and not their noses, and walked away without a word.