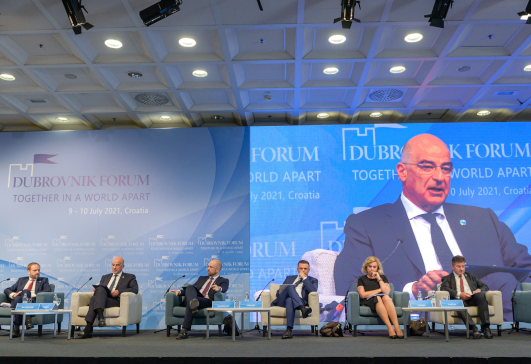 Minister of Foreign Affairs Nikos Dendias’ address at the Dubrovnik Forum 2021 and the panel discussion “The international community and the Western Balkans: How to end the quarantine” (Dubrovnik, 10.07.2021)

Thank you. Dear Gordon, thank you for organizing this. It is a great pleasure to be here in this magnificent place and I have to say, coming from Corfu, I feel very much at home.

Dear colleagues, Excellences, ladies and gentlemen, may I be allowed to state what is the obvious? That the region of the Western Balkans belongs to our European family and that the Enlargement and Neighborhood policies constitute distinct building blocks of the geopolitical European Union; that is how the Commission proclaimed the European Union.

And of course they are crucial to the European Union’s influence and credibility. Τhey advance the necessary reforms in the countries concerned. A core objective of the European Union’s engagement with the Western Balkans is to help them meet all the requirements of full membership, supporting the fundamental democratic principles, rule of law, economic reforms, alignment with the core European values.

We need a more effective strategic communication and this is instrumental. And it is critical to raise awareness in the region of the opportunities that closer integration and reforms entail, as well as to tackle malign third country influence.

And this requires efforts by the Western Balkan countries themselves.

The accession process will support the transformation of the Western Balkans into functioning market economies, able to integrate fully, create jobs, business opportunities, promote the rule of law, stop the brain drain.

It would not be fair at all, although I completely understand the grievances, to start a blame-game between the Western Balkans and the European Union regarding the process and rate of reforms.

It is obvious that what is called ‘enlargement fatigue’ is spreading in the Western Balkan countries. I have to say the Covid-19 situation didn’t help at all. And also, as in all accession processes, a degree of disappointment of our Western Balkan Partners should have been expected.

And as far as Montenegro and Serbia are concerned, their willingness to abide by the new enlargement methodology is positively noted.

The economic and investment plan for the Western Balkans is a plan for the long-term development of the region, based on the pillars of green and digital transition, but also through the promotion of regional integration.

And I am happy to hear that from the 1st of July, roaming among the Western Balkan countries is free. It is an important step.

Greece stands ready to continue assisting our Western Balkan partners. However, this support would have been incomplete, if sustainable, comprehensive measures for the region had not been planned.

Since the Thessaloniki Summit in 2003, Greece has been actively engaged and played a role, if I may say also, a central role in the European integration of our Western Balkan neighbors and friends.

It remains more than ever a geostrategic investment for a stable, strong and united Europe.

We are determined to work hand in hand with the Slovenian Presidency towards achieving our common goals.

Finally, let us today, from the Dubrovnik Forum send a solid and unanimous message that our common objective is a peaceful, strong, stable united Europe, through the integration of the Western Balkans in the European Union.

Thank you so much for your kind attention.