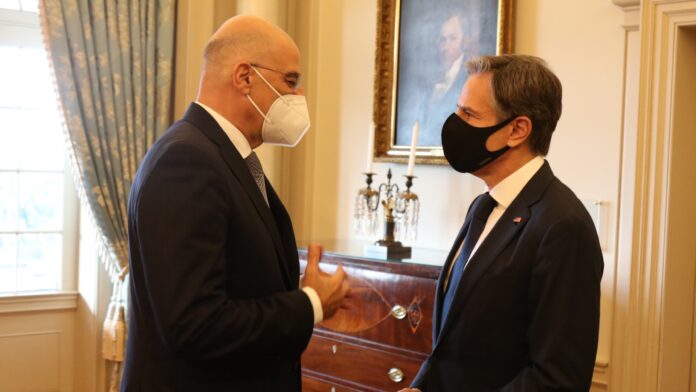 Minister of Foreign Affairs Nikos Dendias’ opening remarks for the third round of U.S.-Greece Strategic Dialogue

it is a great honor and pleasure to open along with you the third round of our Strategic Dialogue.

Our strategic partnership has reached an unprecedented level by enhancing cooperation in many areas, such as enforcement, counter-terrorism, energy, economy, trade, culture and people to people contacts.

The relevant stakeholders will address, later today, ways of expanding them even further.

The revision of the Mutual Defence Cooperation Agreement we will sign in a few minutes, is, symbolically and substantially, the foundation of our long-term partnership.

We understand that the US is increasingly preoccupied with challenges on other parts of the world. So, dear Tony, your commitment to Greece is greatly appreciated.

You are investing in strategic locations in our country.

Following the migrant crisis and the tensions in the Eastern Mediterranean, last year, they acquired increased importance.

You are underlining that the US, as well as Greece, are firmly determined to mutually safeguard and protect the sovereignty and territorial integrity of each country.

Against actions threatening to peace, including armed attack or threat thereof. 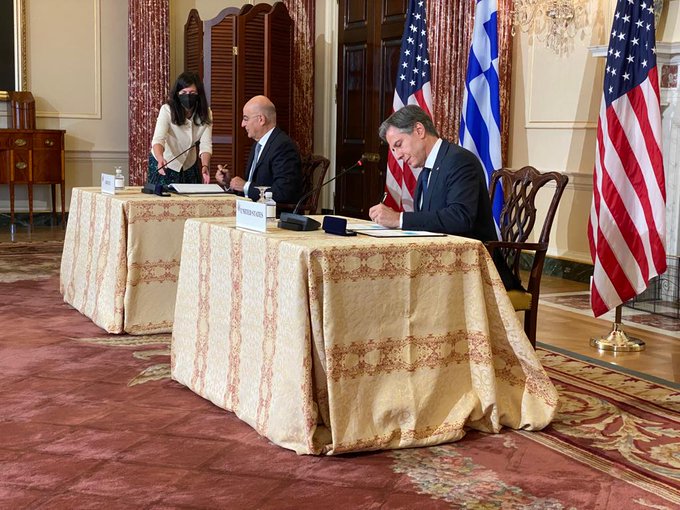 Greece is committed to resolve disputes through diplomacy and always in accordance with International Law.

Over the past two years, we have concluded agreements on the delimitation of sea zones with Italy and Egypt, and agreed with Albania to defer this issue to the International Court of Justice.

We very highly appreciate your firm belief that sovereign rights should be respected in accordance with the International Law of the Sea.

We hope that all countries of the world will embrace this principle.

We stand ready and willing to work with them, on this basis.

We have already established strategic ties with common partners and Allies.

I am happy that I met our Israeli counterpart yesterday, as you did by the way, and I will be meeting my Emirati counterpart later today.

Greece, being the first South-East European country to join the European Union, has also an increased responsibility to ensure the integration of the Western Balkans into the European family. So as to promote stability and prevent forces that want to turn the clock backwards to dominate this volatile region.

Recently, Greece concluded a security and defence agreement with our NATO Ally, France. This agreement will contribute to enhancing our defence. It will also contribute in enhancing the European pillar of NATO, which is very important. And towards a fairer burden sharing between the two sides of the Atlantic.

Because, Greece is and will remain a fully committed Ally to NATO.

Last but definitely not least, Greece, within the limits imposed by our size, will strive to contribute in addressing global challenges, such as the pandemic and climate change.

We have already donated almost 2 million vaccines and we are building bridges with partners across the globe, most notably with India and Australia. More recently with Latin America and Africa.

The world is becoming smaller, but the challenges are getting bigger by the day.

The only way to address them is by working together, while respecting our fundamental principles, such as democracy and our common respect for international law.