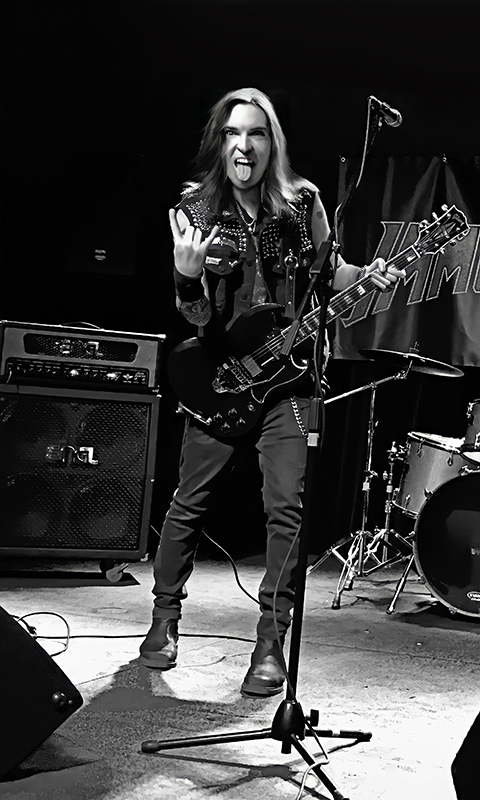 Dave, I hope you are really fine. What is the least expected first question you might hear?

Most people think of you as a dedicated metalhead…you have a great metal image and unique style, but how do you see yourself?

Thank you very much. I’m a what you see is what you get type guy. So I’d say that was a good description / assessment of who I am. Music & Metal is a way of life for me. In fact, I even wrote a song called “We Were Born For Metal” which is about exactly that! I live my life without a mask and I wear my heart on my sleeve. I’m not afraid to be myself or speak my mind.

Is there a big difference between your public image and the real person?

Not much difference at all, no. The main difference is that outside of my music work I am a fairly private person. When I’m performing or doing band related work, I try to be more outgoing. I also try to be more social as well. Especially with fans. Being good to my fans is very important to me. But as far as my public image and me as a person, there’s very little difference.

Νo rock star seems similar to you. So who did you model yourself on?

I was influenced by several people like Rob Halford, Lemmy Kilmister, Ralf Scheepers and so on, but mostly I’ve always tried to be as unique as possible. So, I guess I’ve just followed my own path, pulling inspiration here and there from various people I admire but working hard not to become a photocopy of them either.

You use this rock trick, but also some gentle and sensitive vocals…generally a unique singer. Who were your biggest influences and do you believe that you would sound really different outside of Immortalizer concept? I really think that you could easily be a perfect pop vocalist, too!

Thank you so much, I appreciate that. I’ve always tried to be as original as possible when it comes to my music, lyrics and vocals. I’ve been strongly influenced by vocalists like Rob Halford, Ralf Scheepers, Lemmy Kilmister, Biff Byford, Dio, Andi Deris, Ozzy and James Hetfield (to name only a few). I definitely don’t have the range some of those singers have, but I certainly give it my all when I’m recording and performing. When I started working on my vocals with legendary singer Ralf Scheepers I learned so much and feel I’ve come a long way since he’s been helping / teaching me. I never thought of what my vocals would be like over pop music to be honest, but it’s nice to think my vocals have that kind of versatility.

You seem that you enjoy Immortalizer band but if you were to cover any other songs, what would it be?

I really do enjoy it a lot, yes. I’ve spent years developing my own sound and I’m quite happy with it now. I am planning to one day release a covers album actually. Or at least add some covers as bonus tracks on my albums. I’m planning to cover Motörhead, Saxon and Judas Priest first, but I’ve got lots of other covers in mind as well.

Well, music and music related stuff makes up most of my day. From practising, writing, recording to designing artwork or making music videos etc. But other than music, I love spending time with my lady and our dog. We love watching movies in the evenings as well.

One of my favorite songs on your upcoming album is the new video clip for  “I’m Gone” and you look really awesome on this. So tell us about that one as well!

That’s wicked! Thank you! I’m glad you‘re enjoying the song and video! “I’m Gone” is a song a lot of people can relate to I think. Most people have lived through bad relationships and know how sometimes you just have to walk away for your own sanity. I really love the guitar solo for that track as well. One of my favourite lyrics is in that song too. “Are you player or the pawn”. I always thought that was a great line. It came together quickly but I was really pleased with the end result. That was also the first track on which Ralf Scheepers helped me by crafting me a new vocal sound as well as mixing and mastering the track. So it’ll always be extra special to me for that reason. Same for my most recent single “Gone To Hell”. Ralf has been so amazing and supportive. I owe him a lot.

Tell us about the lineup of your band these days. Are you going to search for musicians?

Absolutely! For the time being I’m still tackling everything myself (with Ralf’s help of course) but I do plan on putting a solid band together as soon as possible to be able to play gigs and one day tour! \m/

And what can fans expect in terms of setlist and performance from you?

Well, the first setlist will be mostly the tracks from the first album of course, however I do plan on adding a few covers for the live shows as well.

Dave, it’s been a pleasure talking to you. All the best with the new album and the band. And let’s keep in touch!

Thank you very much! I really appreciate that and it’s been a pleasure! Looking forward to next time! All the best,