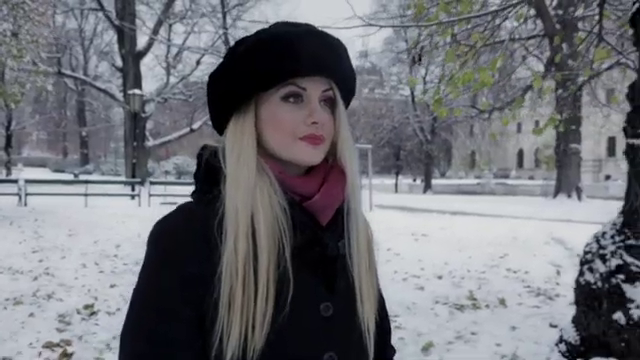 The well-known Cypriot soprano Chryso Makariou, based in Vienna, has released her special Christmas music video shot in beautiful and enchanting Vienna! In this video, you will be able to see fairy-tale shots filmed in Vienna’s magnificent and grand royal palace as well as in picturesque neighborhoods where Greek migrants have flourished and shined throughout the ages. The video’s highlight takes place at the historical Holy Trinity Greek Orthodox Church in Vienna. During this video Chryso Makariou with her angelic voice carries us away while singing one of the best versions of “Ave Maria” ever written; Mascagni’s “Ave Maria”, inspired by the Intermezzo from the “Cavalleria Rusticana” opera.

Considering the hard times everyone has been going through this year, Chryso Makariou along with her colleagues decided to get across messages of solidarity, love and sympathy in a unique way. She also gives messages of resilience and faith to all artists. In a solemn and imposing atmosphere created by the “Ave Maria” opera, this video’s takeaway is clear; Art is not a luxury, but a necessity. Art’s vigil light should always remain on!

Simos Batzakis was in charge of directing and editing the video in question, while filming was done by both Simos Batzakis and Kostas Konstantinou. Chryso Makariou was accompanied by members of the well-known Vienna Classic Orchestra.

“Ave Maria” is part of a (live) recorded concert called “Christmas in Vienna”, which took place at the Holy Trinity Church in Vienna in support of the Cyprus Association for Children with Cancer and Related Diseases “One Dream One Wish”. Vienna Quartiere Artistico © supported the production of the music video and holds the copyright.

Chryso Makariou, a renowned Cypriot Soprano, is a graduate of the Pancho Vladigerov National Academy of Music in Sofia, Bulgaria. After completing her studies in the Bulgarian capital, she moved to Vienna where she continued her studies and specialised further in classical music and Opera singing alongside Margarita Lilova, a well-known worldwide Mezzo-soprano. She lives in Vienna since then and she works in the Austrian capital as well as in central Europe in general. Mrs. Makariou has performed in great concert halls worldwide, such as Musikverein in Vienna, Gasteig Philharmonie in Munich, Slovak National Radio Symphony Orchestra in Bratislava. Moreover, she has collaborated with Opernloft Hamburg, State Opera Stara Zagora in Bulgaria, Vienna Classic Orchestra, Opera Piccola in Vienna, etc.

Apart from her soloist activities, Chryso Makariou supports charities and organisations, such as SOS Children’s Villages, the non-profit child welfare organization “The Smile of the Child”, based in Greece, and the Cyprus association “One Dream One Wish”; during her performances she often takes the time to raise people’s awareness on sensitive social and human issues, such as children’s health and welfare.