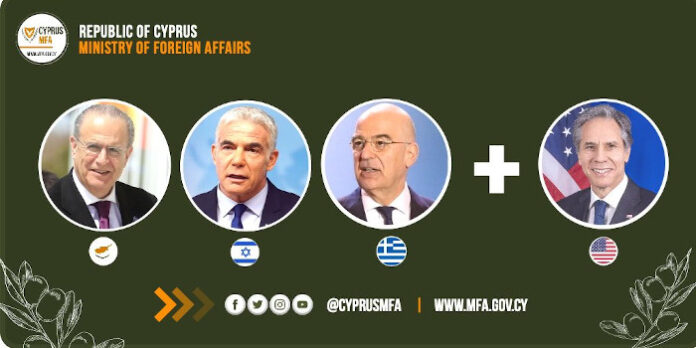 The foreign ministers of the Republic of Cyprus, Hellenic Republic, State of Israel plus the United States held a virtual meeting yesterday, 9-5-22, to reaffirm their shared commitment to promoting peace, stability, and prosperity in the Eastern Mediterranean.

In a critical period for Europe, the United States, and the world, the Ministers reaffirmed their commitment to the 3+1 format and decided to intensify their cooperation in the areas of energy, economy, climate action, emergency preparedness, and counter-terrorism, contributing to resilience, energy security, and interconnectivity in the region.

The 3+1 support additional initiatives such as the Negev Summit that promote cooperation in the region.

The Ministers condemned the recent horrific terror attacks against Israelis, including the May 5 terror attack in Elad.

The Ministers decided to develop a roadmap with tangible deliverables for the coming year and to set the stage for a follow-on meeting before the end of 2022.