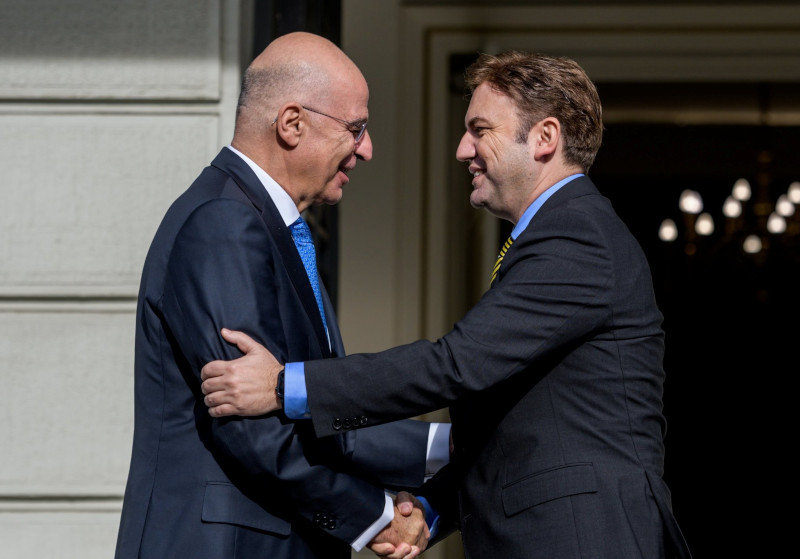 today’s meeting between Dendia and Osmani

It is such a great pleasure to welcome you in Athens, our third bilateral meeting in the last 7 months. And I have to say that it takes place at a very appropriate moment. A few weeks before your country assumes the OSCE Chairmanship for 2023.

I congratulate you and I wish you every success.

This will be a big, challenging task.

Following a turbulent year, during which our continent witnessed, and continues to deal with, a catastrophic and aggressive invasion.  But we are confident that North Macedonia will do its very best so that the OSCE performs its mission and promotes security in Europe. We are going to discuss about it over our working lunch.

But please let me say in public that we will fully support you in this endeavor.

Today we also had the opportunity to discuss our evolving bilateral relations.

And let me stress the importance we attach to enhancing those relations.

Greece is your closest partner and ally in the region, without any hidden agendas. And I have to say that we have to work to convene the High – Level Cooperation Council so that it can manifest itself openly.

This support has been reaffirmed by our clear-cut position and our consistent efforts in favour of North Macedonia’s accession to the European Union.

As well as the holding of the first European Union – North Macedonia Political Intergovernmental Conference.

The Political Intergovernmental Conference has sent a clear message, not just for North Macedonia, but also for the European perspective of all Western Balkans.

And we firmly believe and we strongly advocate that the future of the entire Western Balkans region is within the European Union.

And we also advocate that we cannot allow third parties, driven by revisionist aspirations, to take advantage of integration fatigue in the Western Balkans.

We welcome, therefore, the continued determination of North Macedonia to advance its EU reform agenda.

And we are ready and willing to offer our close cooperation.

We, of course, also talked about our growing bilateral cooperation, mainly on energy, economy, defense and inter-connectivity. We will continue doing so over lunch.

We discussed about the strategic importance of the Greece – North Macedonia Natural Gas Interconnector.

We can cooperate in domains of mutual interest, such as the RES (Renewable Energy Sources) and the Green Energy Sector.

Our defence and military cooperation is also steadily growing to the mutual benefit and to NATO’s benefit.

We highlight the Policing of North Macedonia’s airspace by the Hellenic Air Force, since December 2019.

And I would like also openly to congratulate you for aligning with EU’s Common Foreign and Security Policy (CFSP). Your conduct on this is exemplary, my dear Bujar. 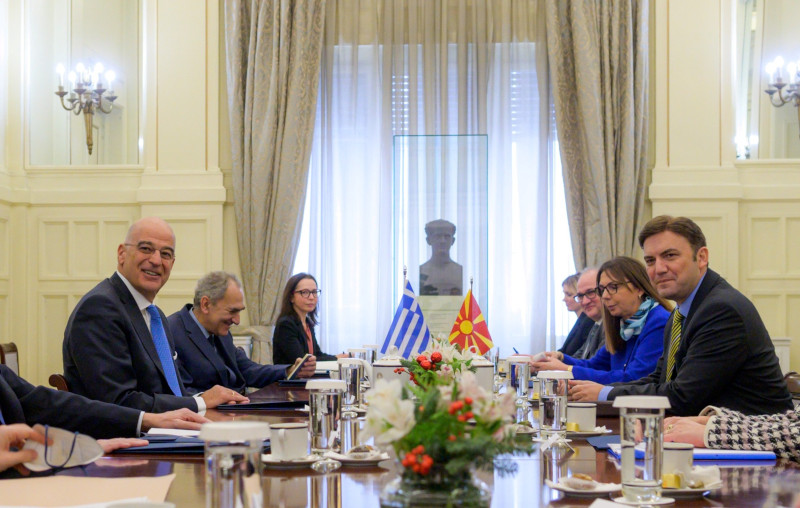 During lunch, we will have the opportunity to discuss also issues that have to do with our bilateral trade which is growing, is worth one billion now. This is very important for both of us. We will also discuss issues of regional importance and world importance.

I will take the opportunity to brief you on the Turkish aggressive and escalating rhetoric, and on the situation in the Aegean and the Eastern Mediterranean.

And I will touch upon our relations with the countries of the region that have evolved into strategic partnerships.

You were in Egypt and met our dear friend and colleague Sameh Shoukry a few days ago. I talked to him in the last few days, the last one was yesterday evening. As you know, after many decades, we were able to sign the Agreement on the delimitation of our Exclusive Economic Zones.

I had the pleasure to sign it together with Sameh in Cairo.

An exemplary Agreement concluded in the framework of the International Law and the Law of the Sea.

And it contributes to stability and security in our region.

Contrary to the null and void memoranda of understanding that have been signed between the Tripoli administration and Turkey.

I would like here, publicly, to welcome the announcement of President El-Sisi’s Decree which delimits the western maritime borders of Egypt.

Greece and Egypt have a continuous and strong coordination on issues related to stability and security in the Eastern Mediterranean.

In this respect, I am also looking forward to receiving Sameh in Athens, early next year; maybe it will be the first ministerial visit of 2023.

Later, we are going to discuss about the Russian invasion in Ukraine, our efforts to stand by the Ukrainian people. Having the Chairmanship of the OSCE brings you into the centre of this matter.

Let us hope that during your Chairmanship we will see some sort of solution on this issue.

For us, the answer is always simple. It has to do with the fundamental pillars of our foreign policy, which is respect for territorial integrity, national sovereignty and independence of all states, as well as abstaining from the use of force or the threat of the use of force.

Dear Bujar, it is always a great pleasure to host you in Athens and I am looking very much forward to reciprocating and coming again to Skopje, and enjoy your warm hospitality. Again, thank you so much for being here today.