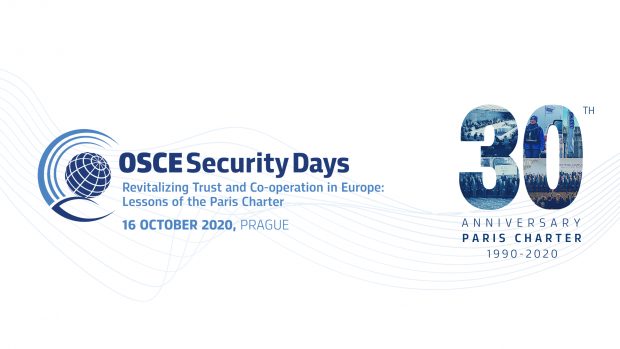 PRAGUE / VIENNA – Ahead of the 30th anniversary of the Charter of Paris for a New Europe, opening speakers of an online OSCE Security Days event commemorating this historic document called on States to revive the spirit of the 1990 Paris Summit in overcoming today’s challenges, distrust and heightened tensions in European security.

“The era of confrontation and division of Europe has ended”, proclaimed the Paris Charter, which was adopted following the Summit in the French capital a year after the fall of the Berlin Wall. Signed by Heads of State and Governments of participating States of the then Conference for Security and Co-operation in Europe (CSCE, the forerunner of the OSCE), the Paris Charter envisioned “a new era of democracy, peace and unity”.

“For forty years we have had stability without freedom in Europe. Henceforth we want freedom with stability,” affirmed French President François Mitterrand at the time. The Paris Summit “heralded a new, post-confrontational era in European history,” said Mikhail Gorbachev, leader of the Soviet Union.

“The institutionalization of the CSCE began at the Paris Summit with the establishment of the first permanent structures for a comprehensive regional international organization that we now know as the OSCE. This, as well as the broadening of the CSCE’s activities, were one of a number of concrete steps taken to heal the former East-West divide in Europe,” Yrjölä said. “What Paris established is the model that is still with us: a set of executive structures, receiving consensus-based mandates and guidance from the participating States, supporting and reporting to them.”

Ivan Korčok, Slovakia’s Minister of Foreign and European Affairs, praised the work of the OSCE in the years after Paris, but said there was still work to do because “we still witness conflicts, humanitarian crises, and undemocratic establishments”.

“Thirty-one years ago, a wave of freedom swept across Europe and beyond, with people demanding their freedom and human rights. But, still, there are nations that lack fundamental rights and freedoms, or suffer in ongoing conflicts,” Korčok said. “It is our – the OSCE and its participating States’ – obligation to continue translating the words of human rights into facts on the ground, into the reality of people’s everyday lives, as well as to facilitate nations’ rights to democratic governance and representation. Because, in the end, what matters the most are security, freedom, and dignity.”

Amid “the growing complexity of threats and challenges that create instability and unpredictability” in the world today, Martin Povejšil, Deputy Foreign Minister of the Czech Republic, said: “It is my strong belief that the OSCE, again, has a critical role to play.”

Ambassador Igli Hasani, Chairperson of the OSCE Permanent Council, said that while the OSCE is a diverse organization, there can be no divergence from the Organization’s founding principles, including those agreed in Paris.

“Events like this one today should not leave us yearning for yesteryear,” Hasani said. “They should act as an inspiration and motivation to forge our own legacy. Just as Paris succeeded in overcoming confrontation, we should prove ourselves capable of doing the same now.”

Over the course of the event, participants explored the highlights and turning points of the Paris negotiations, and the future of comprehensive and co-operative security in the OSCE area.

Participants also heard video messages specially recorded for the event by former United States Secretary of State James Baker, who had a leading role in the negotiations of the Paris Charter, and from Ambassador Wolfgang Ischinger, who was part of the freshly reunited German delegation.

OSCE Security Days events gather prominent experts from governments, think tanks and academic institutions, civil society, youth and the media, to engage with each other and with OSCE participating States and Partners for Co-operation in an informal and interactive discussion. They are intended as a platform for sharing experiences and good practices, and offer an opportunity to examine emerging trends and priorities for action.