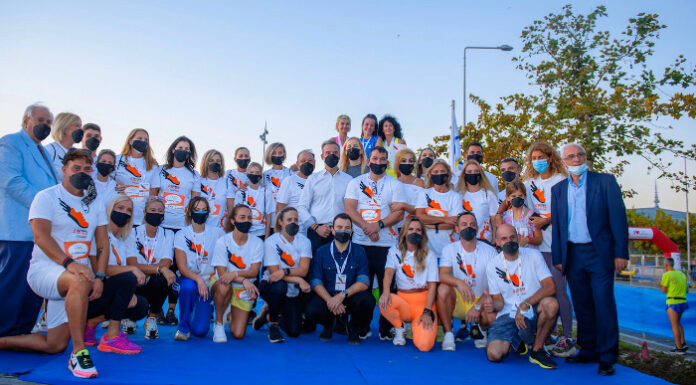 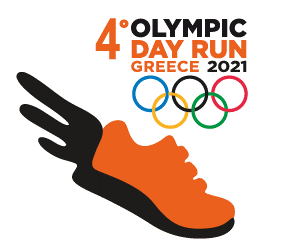 On Sunday, September 26, 2021, Thessaloniki was at the center of the Olympic and tourism world map with the “Olympic Day Run” Greece. The only Olympic Road Running Race in the country, was organized for the 4th year under the auspices of the International Olympic Committee to celebrate the International Olympic Day, spreading a message of global solidarity, unity and hope.

The entire Olympic family was at the event’s starting line

Olympians, Paralympians, distinguished athletes and coaches, sports clubs and associations from all over the country, as well as active citizens, gave an appointment at the starting line for the supreme Olympic road running event of the country, In the utmost covid-safe Olympic event, people of all ages ran honoring the Olympic spirit and ‘fair play’. The Olympic Day Run GREECE joined its forces with “The Smile of the Child” in order to offer more smiles to children who need it. With every registration in the social contribution packages of the 10, 5 or 2 km races, participants offered 3 euros to the Organization’s continuous effort so that all children can have everything they deserve and are entitled to.

The 4th Olympic Day Run Greece, bearing the hallmark of the Olympic cycles, was held with a health & safety protocol approved by the Health Committee of the General Secretariat of Sports and the responsible health bodies. There was a mass-participation of runners with utmost safety in the 10km, 5km and the 2km road running race of social contribution and dynamic walking, with a starting and finishing point on Alexander the Great Avenue (at the height of the ‘Umbrellas’ sculpture). All finishers received a commemorative medal and a commemorative certificate of participation by the International Olympic Committee, while the winners received special prizes of the 4th “Olympic Day Run” GREECE. 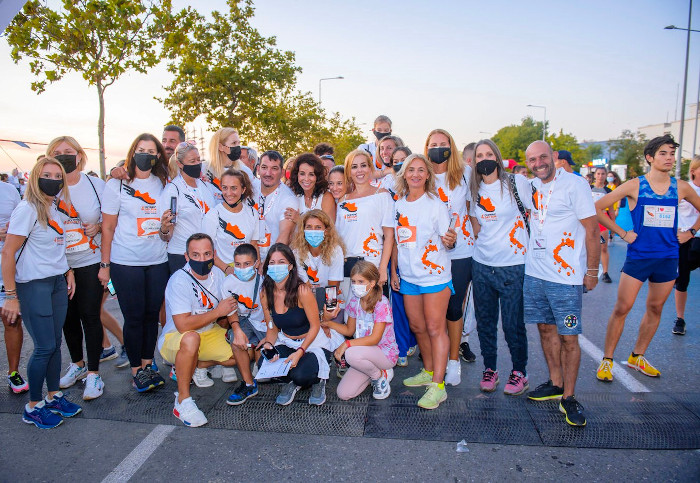 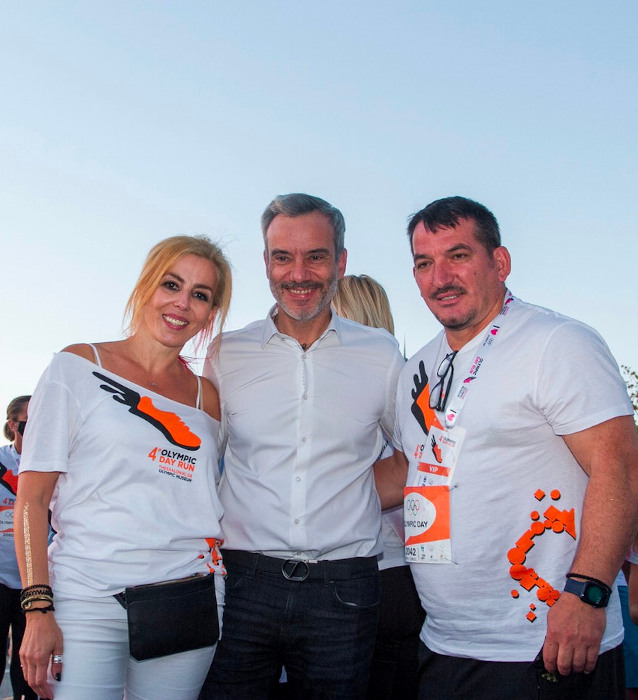 The 4th Olympic Day Run GREECE was organized by the Hellenic Olympic Committee, the International Olympic Academy, the Municipality of Thessaloniki, the Olympic Museum, the Hellenic Olympians Association, SEGAS and EAS SEGAS Thessaloniki and DKO OLYMPiA  with the participation of Olympians, Paralympians, Distinguished Athletes, Sports Clubs and Institutional Bodies from all over the country, with the support of the Hellenic Olympic Academy, the Hellenic Olympic Winners Association, the Greek Paralympians Association, the Region of Central Macedonia and Thessaloniki International Fair-HELEXPO. The event was held under the auspices of the Hellenic National Commission for Unesco, the Ministry of Interior of the Macedonia-Thrace Sector, the General Secretariat of Sports, and the Municipalities of Ampelokipi-Menemeni, Thermi, Kalamaria, Kordelio-Evosmos, Neapoli-Sykies, Pavlos Melas, Pylaia-Chortiatis, Volvi, Delta, Thermaikos, Lagadas, Chalkidona, Oreokastro, Almopia, Aristotelis, Dion-Olympos, Emmanuel Pappas, Iraklia, Kavala, Kassandra, Kilkis, Naoussa, Polygyros, Serres and Skydra.

The Olympic Museum and Olympic Day Run Gold Sponsor, PROTERGIA, the Grand Sponsor, Ethniki Asfalistiki, the Race’s Silver Sponsors, Thessaloniki Transport Authority (OSETH) and Alumil, the Bronze Sponsors, Masoutis and Evlogimeno, the Sponsors, Eurobank and Goulidis, the Supply Sponsors, Athos, Dole and Red Bull, the hospitality sponsor Grand Hotel Palace, the Transportation Sponsors, EcoCar and ASV Electrokinisi, the Equipment Sponsor, Thessaloniki Tourism Organization and the event’s Tourist Support Agency, Greece on the Go, they all served the vision of Olympism and offered their kind assistance for the implementation of the project. Moreover, they contributed to the country’s promotion on the Olympic world map, as well as to the dissemination of the Olympic values ​​to a better future. 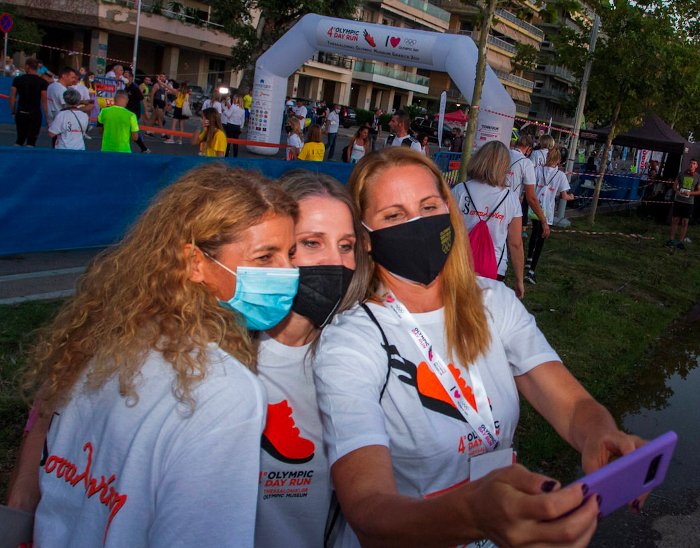 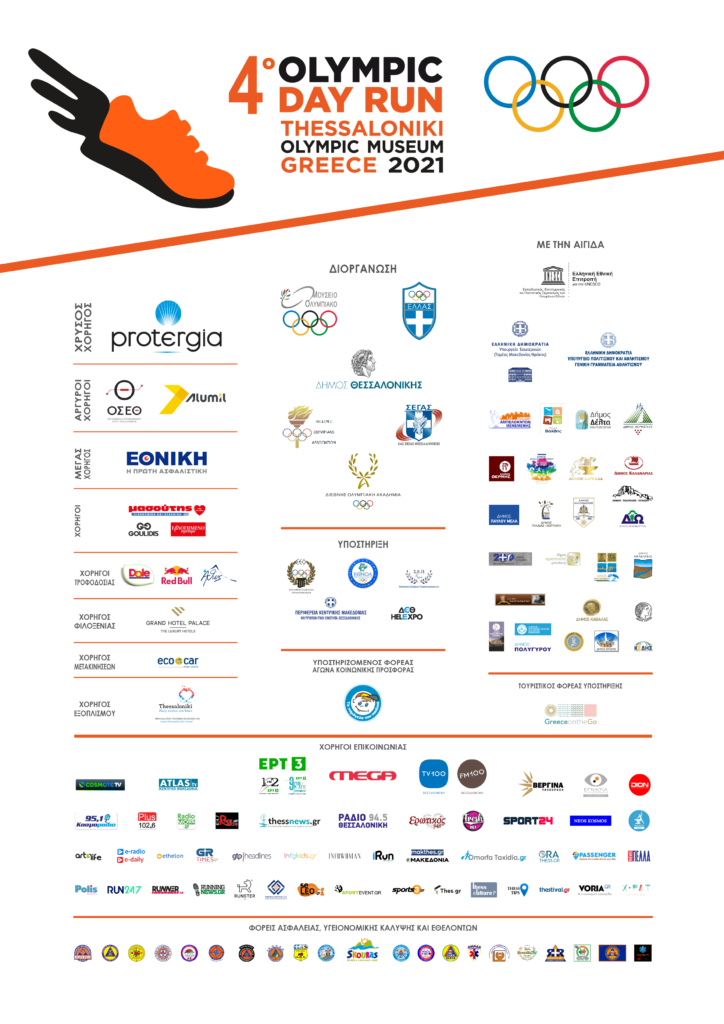