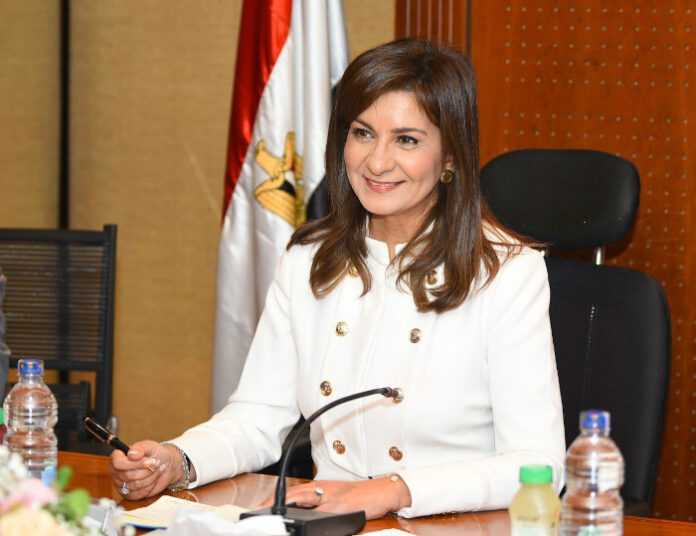 Your Excellency, thank you for agreeing to talk to Hephaestus Wien. And without further ado, our questions:

Ministry of Emigration was reinstated after a twenty-year cancelation by virtue of a republican decree on 19th of September 2015 to be the competent authority to manage and care for Egyptian expats affairs within a framework of coordination with ministries, agencies and bodies concerned with the same matter under the auspices of the Council of Ministers. The ministry is considered the main body for communicating with Egyptians abroad. It was founded in response to the calls of Egyptians abroad with the aim of forming a national public opinion to support national issues and benefiting from the experiences of Egyptian expats in various fields of development. It also aims at strengthening the national, political, social and economic ties between them and their homeland on one hand, and between themselves on the other, to set a comprehensive policy for the emigration of Egyptians abroad in the light of the goals of national development as well as the interest of the country.

The period from 2014 to June 2018 witnessed huge changes in the immigration situation and the affairs of Egyptians abroad. This change reflected the state’s interest in general and the political leadership in particular with Egyptians abroad. This interest aims at elevating their contributions to development efforts in the country, acknowledging their political and social rights in the state, working to maximize their belonging to the homeland and building a base of Egyptian expats to support the state’s vision, defend its issues, improve the state’s image abroad, and establish an effective role for popular diplomacy.

This came in an unprecedented move in the history of the Egyptian state. A general trend was taken in the state to endorse the rights of Egyptians abroad, take care of their interests, link them to the homeland and contribute to the development plans of the state in accordance with unprecedented historical constants on all levels.

In this sense, 2014 constitution, in Article (88), stipulates the state’s obligation to safeguard the interests of Egyptians residing abroad, protect them, guarantee their rights and freedoms, enable them to perform their public duties towards the state and society and contribute to the development of the country, the legal approval of the regulations of their participation in elections and referendums in accordance with their conditions without being bound in this by the provisions of voting, counting and announcing the results stipulated in this constitution. All this is conducted without ny violation to the integrity of the election or referendum process. In addition, sustainable development strategy has been adopted in 2016 to promote economic and human development through stimulating the contributions of Egyptians abroad in creating an innovative and knowledge-based society. Moreover, he House of Representatives also approved the presence of representatives of Egyptians abroad to confirm their presence within the Egyptian entity and ensure their representation in the House of Representatives for the first time with a number of 8 members.

Yes, Egyptians abroad have entities in different countries of the world, such as clubs, federations, and various civil society organizations, each of which works to implement a number of events and activities that serve the members of the community in the countries in which they reside. The Ministry of Emigration worked to bring all Egyptian entities abroad under one umbrella with cooperative work policies that the national interest trumps, and to organize the work of these entities in a way that helps provide support and assistance to members of the communities. 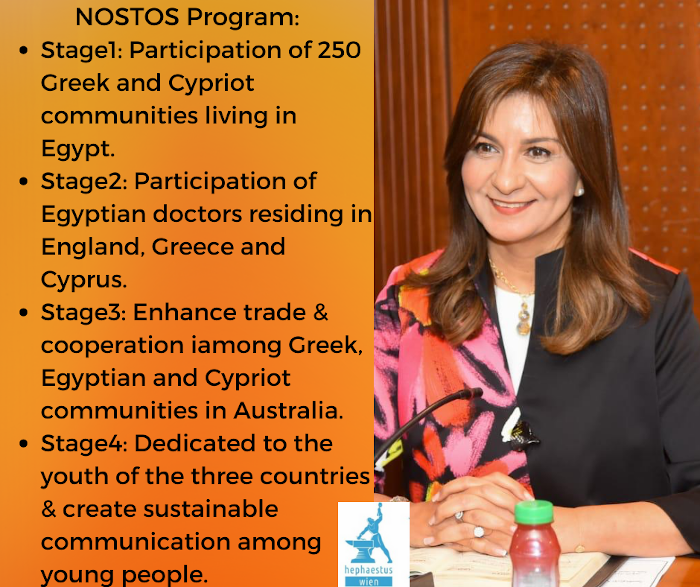 The memorandum of understanding, which I was honored to sign in the presence of the President of the Republic, is a continuation of the fruitful cooperation with the Greek and Cypriot sides in the framework of strengthening relations between the three communities around the world. This is based on the common bonds attached by the three cooperation parties to their communities and as a continuation of “NOSTOS- Reviving the Roots” initiative, which confirms the solidity of Egyptian-Cypriot-Greek relations throughout history.

Through this memorandum, we can cooperate with communities and encourage mechanisms for exchanging information and experiences as well as promote common values and collective interests abroad, to achieve the best cooperation on expatriate issues including youth and investing in the future. In addition, we aim at supporting the joint cooperation efforts of the communities of the three countries, with the aim of preserving their national identity through the entities representing them (cultural and social, sports clubs, etc.), to deepen relations between peoples. Furthermore, we encourage sponsoring events and celebrations of national occasions and holidays, confront illegal immigration and combat terrorism, and maximize economic cooperation between the three peoples, which was the result of previous versions of the presidential initiative to revive the roots – NOSTOS. 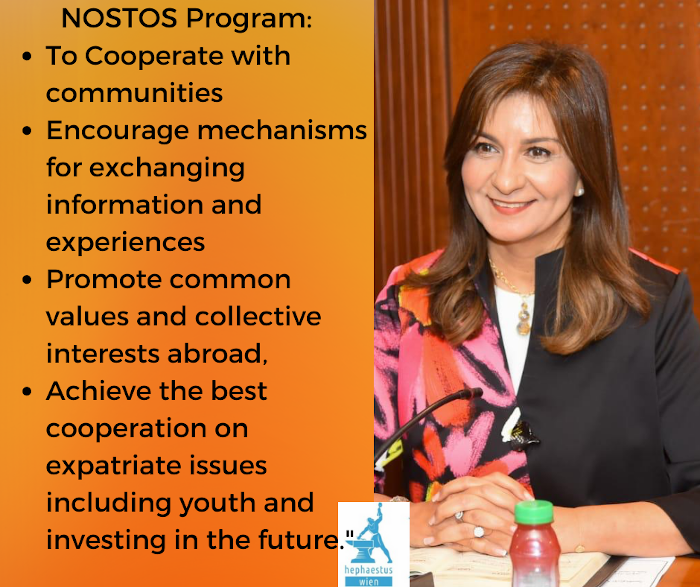 We will soon hold a meeting with the Greek and Cypriot sides, dear friends Fotis Fotiou, Cypriot Presidential Commissioner and Greek Deputy Foreign Minister Andreas Katsaniotis, in Cairo to agree on the next stage.

Over the past years, we have worked on organizing 4 copies of “Nostos” initiative in cooperation with our partners in Greece and Cyprus.

The first edition came in April 2018 with the participation of 250 Greek and Cypriot communities who live in Egypt, then the second edition was in November 2018 with the participation of Egyptian doctors who are residing in England, Greece and Cyprus. Then the third edition came in 2019 in Australia to enhance trade cooperation between the communities residing there from the three countries.

Egyptian women pass through a golden age in recent years, Since president Sisi come to office; we now have 8 women ministers in the Egyptian government and a governor, and we have women parliamentarians, about a quarter of the total number of members. On the level of supporting the Egyptian state, and since the return of the Ministry of Emigration in September 2015, we are keen to provide all means of communication with Egyptians abroad, including our great ladies who are interested to build a strong family, A few days ago, we launched with Al-Azhar Al-Sharif Foundation – the largest religious institution in Egypt – “Good Offspring” initiative. The initiative aims to solve the family problems of Egyptians abroad, preserve children in family disputes, and work to resolve those disputes, in response to numerous communications from Egyptian women abroad.

With the organization of the various visits of Egyptian expats to the homeland, there were many complaints about the children’s inability to speak Arabic and to know the identity and history of our ancient country. Therefore, we launched the “Speak Arabic” application, to facilitate knowledge of Egypt, its culture, customs and traditions in Arabic, and to represent a strong addition to Egyptian mothers and help them in educating them their children the Arabic language and the Egyptian civilization.

We have been keen to achieve equal opportunities and provide opportunities for Egyptian women experts to participate in the service of the country, which was not widely available before now. “Egypt Can” series of conferences dedicated one of its editions to Egyptian women in various fields. Those who enriched their knowledge and experiences and embraced all fields were to prove their right to participate in building homeland, along with the rest of our scientists and experts.

Whatever problems we encounter, we have women whose history testifiy that they are capable of making the impossible and conquering difficulties. Why not, while they are the granddaughters of Hatshepsut and Imhotep as well as other prominent signs of history. 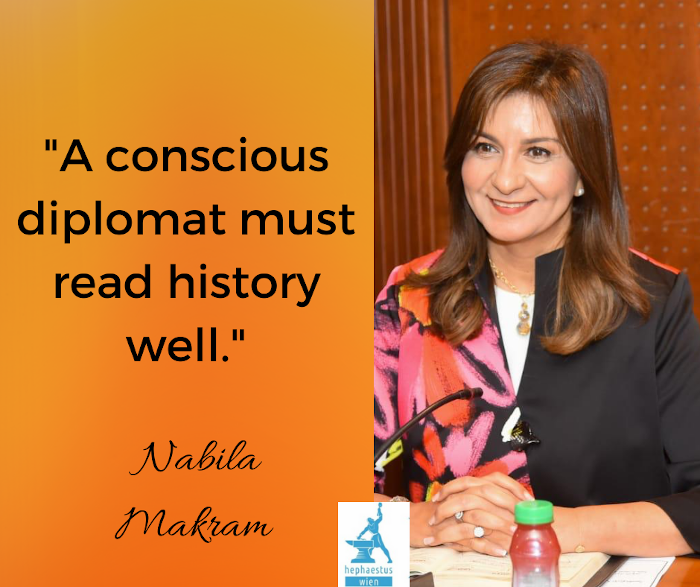 Since I graduated in the Faculty of Economics and Political Science, and I repeat the saying that the greatest things have not yet come, and the greatest successes are those that have not happen yet. There are many stops that we look at with pride. During these stops, our country’s name had to be high in the agenda as it deserves that owing to its history and civilization. Following the assumption of the immigration portfolio in the Egyptian government, we were keen to restore confidence to Egyptians abroad, and we succeeded in attracting hundreds of scholars and experts, to participate in achieving the sustainable development that Egypt aims at.

Our talk today to one of the largest Greek media platforms, comes after the success of the Roots Revival Initiative, to benefit from the historical cultural relations between Egypt, Cyprus and Greece. This I see as a great success to draw inspiration from the past to build a better future, for generations to come, that supports prosperity, development and peace.

I learned a lot in the Egyptian Diplomatic School, since I joined the Diplomatic Institute, we learned patience, work calmly, with a clear vision and self-denial, it is not important to be a minister or an ambassador, even simple positions may represent an important number in the equation, and this is part of the success of the Egyptian Ministry of Immigration of the relatively small team. The number and capabilities are less, but we have faith in what we are doing, and a passion to serve our country, which gives us energy in the most difficult stages we have passed.

I also learned that a conscious diplomat must read history well, anticipate the future and realize the facts of the present, which is what Egyptian diplomacy is keen on, as it extends its hand in peace and is keen on constructive cooperation with friends, neighbors and brothers for a more prosperous world. 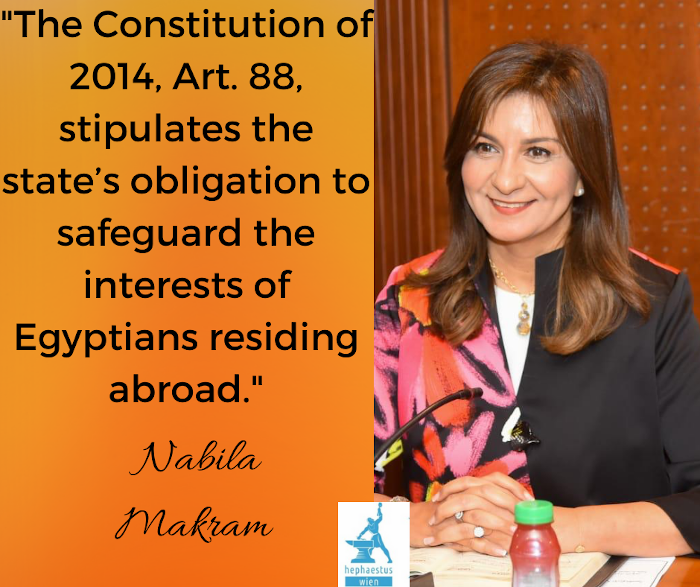 Egyptians abroad are like my children and my brothers, and this is a principle that we have been keen to establish since the first day in the ministry. We seek to have a greater participation on their part in the development projects that the country is witnessing, due to their love and loyalty to their country.

We seek, in cooperation with the ministries and institutions of the Egyptian state, to provide more investment opportunities for Egyptians abroad, to maximize their participation in building their country, and to overcome the obstacles they face. I hope that there will be keenness to benefit from Egyptian laws and incentive packages to achieve success in Egypt.

My wish is that every Egyptian child abroad will have the opportunity to learn about his civilization and the history of his country. This has been our major concern on launching the first phase of the Speak Arabic application, and now are planning for the second phase soon.

Out of our keenness for our children studying abroad and to enroll in various scientific fields, I find that we have a great task to open the doors of communication between these students and various state institutions, to share what they have learned, and to gain experience from their counterparts at home.

We have gone a long way, and we still have more ideas and projects that we are working on, to ensure greater interdependence between Egyptians abroad and at home, and to enhance cooperation between the peoples of Egypt, Cyprus and Greece, with their ancient history and a broad future.