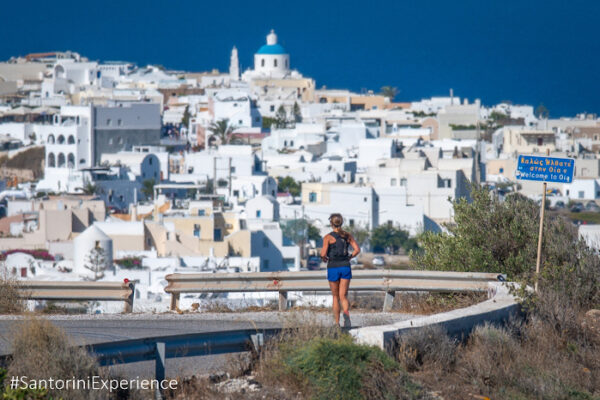 The great event of Santorini Experience that celebrates the cultural, sports and sea tourism in one of the world’s top destinations, returned after two years of pandemic. The new impressive running routes and the established one-of-a-kind open water swimming route, having the unique Aegean images of Fira, Oia, Imerovigli, Akrotiri and the Volcano as a magnificent background scenery, gathered, amateur and professional swimmers and runners in Santorini from 22 countries such as U.S.A., Brazil, Uruguay, South Africa, Nigeria, Jamaica, India, Great Britain, Germany and France on September 23-25.

Culture in the spotlight with the Daedalic Kore of Thira

During Santorini Experience, the Deputy Minister of Tourism, Ms. Sofia Zacharaki, the Mayor of Thira, Mr. Antonios Sigalas and the Deputy Mayor of Thira and Head of Culture, Ms. Sofia Kitsou visited the Daedalic Kore of Thira. The rare masterpiece of Greek sculpture from the 7th century BC, which came to light in 2000 by the Thiraean archaeologist Charalambos Sigalas, during a rescue excavation in the cemetery of the ancient city of Thira, in southeastern Sellada, is now the central exhibit of the under renovation Archaeological Museum of Thira. The world now, has the opportunity to admire the archaic Kore made of white Naxian marble of supernatural size, with height 2.30m and weight 750 kg, 22 years after its discovery.

In the context of her visit in Santorini, the Deputy Minister of Tourism, Ms. Sofia Zacharaki said: “I had the pleasure of being in Santorini on September 23-25, at an iconic sports tourism event, the Santorini Experience, which has been revived after a two-year absence and is now establishing itself as a major sporting event, uniting culture and sports, with many participant athletes from all over the world. The participants even had the opportunity to take a guided tour of the under-renovation museum of Santorini and admire the Kore of Thira, a unique point of cultural reference not only for the island but also for Greece and the world. With the special forms of tourism, such as sports and cultural tourism, a fact emerges that all destinations of our country, even the most popular ones like Santorini, have the possibility to further diversify their tourist product, offering even more qualitative options to the visitor. It is a central priority of the Ministry of Tourism to support events such as Santorini Experience, to which we gave our auspices with great pleasure, reflecting our will for practical support for similar initiatives throughout the country. Greece and Greeks, with this year’s success of tourism, have shown that we are able not only to overcome global crises, but also exceed all expectations. The bet for the future is for tourism development to be sustainable, balanced and qualitative. And in this, the role of institutions like Santorini Experience is pivotal”.

At the same time, the Mayor of Thira, Mr. Antonios Sigalas said, among other things: “We had a very successful event that made a new start and created a dynamic presence in culture as well. I am very satisfied that the Half Marathon was named after the Daedalic Kore of Thira and today we are at the Archaeological Museum of Santorini where we had the honor and pleasure of accompanying the Deputy Minister of Tourism Ms. Zacharaki to enjoy this amazing work. The Municipality of Thira, which places a great deal of emphasis on tourism, but even more on culture and sports, proved the success of its investment program with the Ministry of Culture once again, which supports all these actions and the completion of this space so that Kore can continue to be visited for years to come. Many thanks to everyone who contributed to this great success”.

Significant athletes conveyed the message of culture, emitted by the Daedalic Kore of Thira, through their presence at this year’s Santorini Experience.

The athletes who were present in Santorini and were honored by the event were:

The 2022 program included a new route for the 5km as well as a Half Marathon for the first time.

In addition, the participants in the 5km “Aristides Alafouzos” saw for the first time on Friday, September 23, Santorini from a different ankle, specifically from Akrotiri, one of the most important prehistoric settlements in Europe and admired a new, but equally magical view than the one we are all used to seeing.

Starting from the church of Saint Raphael, runners headed towards the Akrotiri Lighthouse, one of the oldest lighthouses in Greece built in 1892 and reached the westernmost point of the island, returning to Saint Raphael for their finish. At the starting line of the race the two-time European gold medalist and Olympian in race walking Antigoni Drisbioti, the Olympian and European champion in the 400m. with hurdles Periklis Iakovakis, the former international goalkeeper and European champion with the Greek national football team Antonis Nikopolidis and EuroLeague Legend Joe Arlauckas were present.

Both running races were co-organized with AS Ifestos Thira and EAS SEGAS Cyclades.

The best swimming route in the world

On Sunday September 25, participants swam in the unique 1.5 miles (2.4 km) “L & E Nomikos” open water swimming route of Santorini Experience that was held from the volcano to the old port of Fira, having the imposing view of the island in front of them, with the approval of the Hellenic Swimming Federation.

The route was named in honor of the benefactor Evangelos Nomikos and his wife, in whose memory the “Loula & Evangelos Nomikos” Foundation was created, which built the visionary Cable Car 40 years ago. The route has been designed by the race’s technical director with Olympic and world championship distinctions in swimming, Nikos Gemelos. The event was honored with the presence of the Greek world champion in open water swimming and athletes’ representative in the Hellenic Swimming Federation’s Board of Directors, Kelly Araouzou.

Santorini Boatmen’s Association contributed to the absolute safety of the race, which transported the athletes to the volcano and contributed to the smooth implementation of the open water swimming. Moreover, the race was assisted by the 100 specialized escorts in the water, mainly with the support of Lifeguard Patrol which, in addition to its staff, had several lifeboats, the Voluntary Lifeguards of Santorini, the Atlantis Dive Center, the Santorini Nautical Club, and Caldera Yachting, all together having more than 30 boats alongside the athletes! Santorini Experience looked after the swimmers by providing the safety buoy which all swimmers were required to wear for safety. In fact, athletes like Rouwendaal and Carlin set an example by swimming with a safety buoy too.

With the end of the swimming race, the technical director, Mr. Nikos Gemelos, said: “Every year at Santorini Experience is unique. This year, however, is the year that the event was re-introduced so that it will keep taking place again every year. This repetition helps us not to miss this beautiful event and ensures that the experience can be lived by everyone. Events like Santorini Experience bring people closer to swimming”.

All participants received a technical t-shirt with the new, exquisite design of the event from Luanvi, while swimmers also received a swimming cap. Santo Maris Oia and Blue Star Ferries each offered a sustainable backpack, while at the end of each route Erotokritos Cretan Bakery took care of the guests with traditional flavors and of course Vikos, provided the necessary hydration before, during and after the races.

During Santorini Experience, in addition to the races and the visit to the Archaeological Museum of Thira, the following side actions were held: an impressive Sunset Pilates Session with physical education instructor Mandy Persaki at Santo Maris Oia, Cocktails at Esperisma bar restaurant and Volcano View, a unique Boat Tour at the enchanting Santorini from Travel to Greece by Med Shore Tours & Travel, as well as rich meals at Seaside Santorini, Trinacria, The Dolphins and Skala restaurants.

The sponsors alongside the event

The event could not have happened without the implicit support of top Greek companies as well as hotel units that are among the best hotels in the world.

The event’s Official Sponsors included Metaxa Hospitality Group – Santo Maris that created the completely relaxing and rejuvenating Relax Day Spa package for the optimal performance of the athletes and Blue Star Ferries which traveled all participants with safety offering them significant discounts.

Seaside Santorini was the Signature Sponsor.

Vikos Natural Mineral Water was the event’s Official Water which offered the necessary hydration and rejuvenation to all athletes.

Alafouzos Sport was the Official Sports Store, while also acting as the registration center for the races.

Luanvi was the Official Sports Supplier taking care of the athletes’ clothing.

Englobia was the Official Travel Partner which offered special hospitality packages and discounts for the best service of all participants.

Esperisma bar restaurant and Caldera Yachting were the Official Supporters.

Throughout Santorini Experience, the Dive In Action team made sure to achieve a zero footprint at all locations where this year’s races took place.

The value of volunteering

The support offered in all actions by the volunteers of the Sports Management Society of Deree – American College of Greece was very important for the successful implementation of the event.

Santorini Experience took place for the 6th year and was organized by the Municipality of Thira, the Region of South Aegean and the Sports Tourism department of ActiveMedia Group.

Santorini Experience joined the Greek actions of the #BeactiveHellas 2022 program of the European Commission and was held under the auspices of the General Secretariat of Sports. 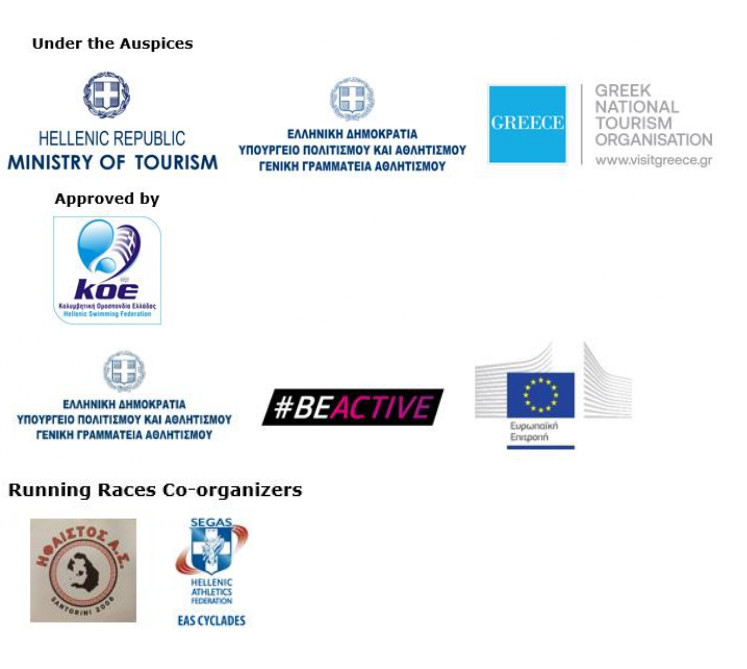