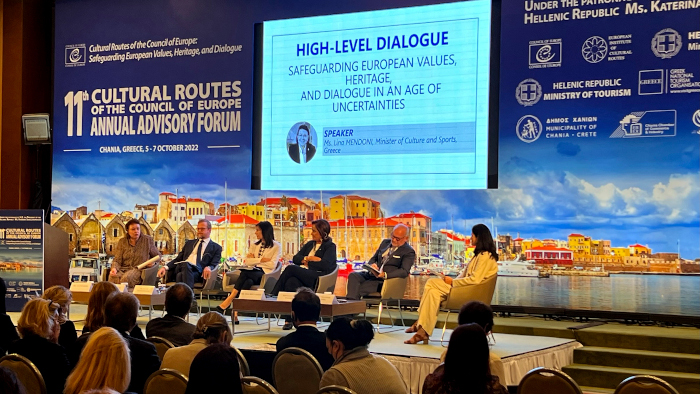 Photo: From the official opening of the Forum. From the left: The Minister of the Greek Ministry of Culture and Sports, Lina Mendoni, the Deputy Secretary General of the Council of Europe Bjørn Berge, the Secretary General of the Greek Ministry of Tourism, Olympia Anastasopoulou, the Vice-President of the Parliamentary Assembly (PACE) and President of the Greek Delegation Dora Bakoyannis and the Chairman of the Statutory Committee for Cultural Routes Ambassador Patrick Engelberg (Luxembourg). The coordinator is by the professor of the University of Paris I, Mrs Maria Barbas,

After 3 days of speeches, round tables and b2b discussions, the 11th
International Annual Advisory Forum on Cultural Routes of the Council of
Europe held in Chania, 5-7 October 2022 was concluded with great success.
The idea of hosting the Forum in Chania was of the founder and president
of the Historic Cafés Route, Mr. Vasilis Stathakis, who was also one of the
co-organizers.

On the occasion of the 11th Advisory Forum, the Cultural Routes Program
celebrated its 35th anniversary this year, while celebrating a Europe rich in
history, heritage, dialogue, and values that promotes cultural diversity,
intercultural dialogue and sustainable tourism.

The Forum was the largest in the history of the institution, which was held
under the auspice of HE the President of the Hellenic Republic, Ms. Katerina
Sakellaropoulou. It was attended by 430 delegates from more than 50
countries, 5 ministers, 6 Secretary Generals, the Vice-President of the
Parliamentary Assembly of the Council of Europe, Ms. Dora Bakoyannis and
the President of the Greek National Tourism Organization (EOT), Ms. Angela
Gerekou.

During the certification of the “Historic Cafés Routε”, the President of HCR,
Mr. Vasilis Stathakis, thanked all national and local bodies that helped
during the effort, stressing that “the certification of the Route by the
Council of Europe is the most valid evidence of excellency for the Cultural
Routes (….) Cultural Routes are a landmark of cultural, economic,
sustainable development and contribute to the tourism promotion of cities
and countries. They are the future of tourism. Thus, the Ministries of
Culture and Tourism, as well as the National Tourism Organizations, should
support even more dynamically the efforts to create Cultural Routes, in
order to emerge in the practice of cultural entrepreneurship following the
example of France, which has fully embraced Cultural Routes. And it is not
the only country that has done so. In my experience, Cultural Routes need
financial support at every level. I know that the journey is difficult, but I
know that if the institutions of each country decide on it, it will be
successful”

It is worth noting that Mr. Stathakis, in addition to his speech during the
certification of the “Historic Cafés Route”, gave an opening welcome
speech, while he also participated at the Press Conference held on
Wednesday, October 5, 2022.

During the Forum, the Enlarged Partial Agreement on Cultural Routes of the
Council of Europe welcomed Lebanon, Albania and North Macedonia as
new countries members.
The Forum officially started on October 5, with a glamorous opening
ceremony at the MINOA hotel and concluded with a closing ceremony at
the Mikis Theodorakis Theater at the Venetian harbor of Chania following a
concert by Stefanos Korkolis and Sofia Manousakis. Throughout the Forum,
&quot;Mikis Theodorakis&quot; hosted an exhibition on the Cultural Routes of the
Council of Europe, which was curated by the Greek Ministry of Culture and
Sports.

The Forum was organized by the Enlarged Partial Agreement on Cultural
Routes of the Council of Europe and the European Institute of Cultural
Routes, in collaboration with the Hellenic Ministry of Culture and Sports,
the Hellenic Ministry of Tourism, the Hellenic National Tourism
Organization, the Region of Crete, the Municipality of Chania, the Chamber
of Industry and Commerce of Chania, and the Cultural Route “Historic Cafés Route”.

At this year’s Forum, the importance of promoting Europe’s common
cultural heritage, while strengthening sustainable local development, was
highlighted.

During the first day of the Forum, at the high -level dialogue by the theme
“Safeguarding European values, heritage and dialogue in an age of
uncertainties” the Deputy Secretary General of the Council of Europe Bjørn
Berge, the Minister of Culture and Sports of Greece Lina Mendoni, the
Parliamentary Assembly of the Council of Europe, Dora Bakoyannis and the
Chair of the Statutory Committee EPA on Cultural Routes, Ambassador
Patrick Engelberg were participating.

During the three days of the Forum, three main general topics were
discussed, which related to:

At the Forum, the initiatives and challenges of the Cultural Routes were
discussed, experiences were exchanged, the progress of the Routes was
reviewed, professional practices were analyzed, new initiatives were
launched, and partnerships were developed across Europe and beyond.
The Forum was attended by representatives of the 48 certified Cultural
Routes of the Council of Europe, as well as representatives of ministries,
international organizations, academics, tourism professionals and owners
of Historic Cafes from Greece and abroad.

Next year, the 12th International Annual Advisory Forum of the Council of
Europe, will be held in the city of Lodz, Poland.