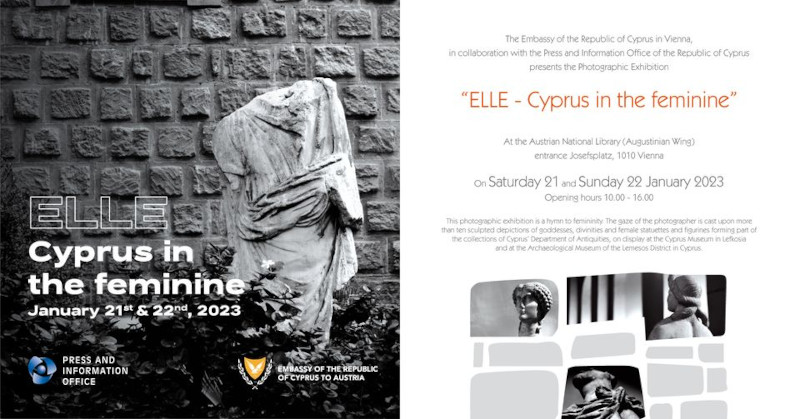 “ELLE – Cyprus in the feminine”

Cyprus, the third largest island in the Mediterranean, has been on a path of development from as far back as the Middle Bronze Age (2600-2100 BC). Trade and maritime activities will eventually endow the island with a cultural identity of tradition merged with cosmopolitanism into an original amalgam.

For a long time, archaeology had invested photography with a single mission, to document and record for study, publication and inventory purposes. Today, however, contemporary photography has broken free from the shackles imposed on it in the early 20th c. to construe its patrimonial task in a completely different light, deploying an aesthetic animated by the intensity of lyric poetry.

In this exhibition, the gaze of the photographer is cast upon more than ten sculpted depictions of goddesses, divinities and female statuettes and figurines forming part of the collections of Cyprus’ Department of Antiquities, on display at the Cyprus Museum in Lefkosia and at the Archaeological Museum of the Lemesos District. The statuettes and figurines illustrate different styles of Cypriot art, from the Chalcolithic (4th millennium BC) to the Roman period. The photographs therefore unveil artworks that, through the uniqueness of their form, bring out the particularity of the civilisation of Cyprus.

As though trying to probe deeper into the material to retrieve historical secrets from 3,000 years ago, the photographer sets out to map the volumes, expose the ephemeral shades of bodies made of white stone and reddish terracotta, bodies silent and wreathed with the dim haze of mystery.

Embassy of the Republic of Cyprus in Vienna