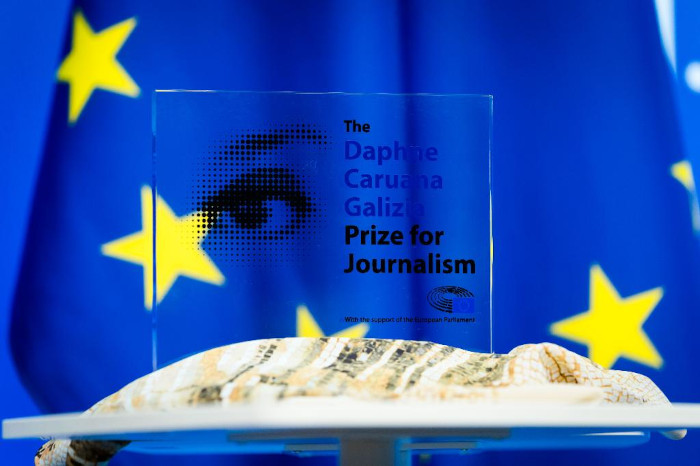 Two journalists, Clément Di Roma and Carol Valade, have been awarded the 2022 Daphne Caruana Galizia Prize for their documentary “The Central African Republic under Russian influence”

This documentary is a Découpages/Arte G.E.I.E co- production, initially broadcast on Arte Reportage in French, German and English. It was also broadcast on France 24 and published in the French newspaper Le Monde.

Roberta Metsola, President of the European Parliament, Pina Picierno, Vice-President responsible for the Prize, and Anthony Bellanger, Secretary General of the International Federation of Journalists and representative of the 29 members of the independent European-wide Jury, opened the award ceremony held in the Daphne Caruana Galizia Press Room of the European Parliament in Strasbourg. 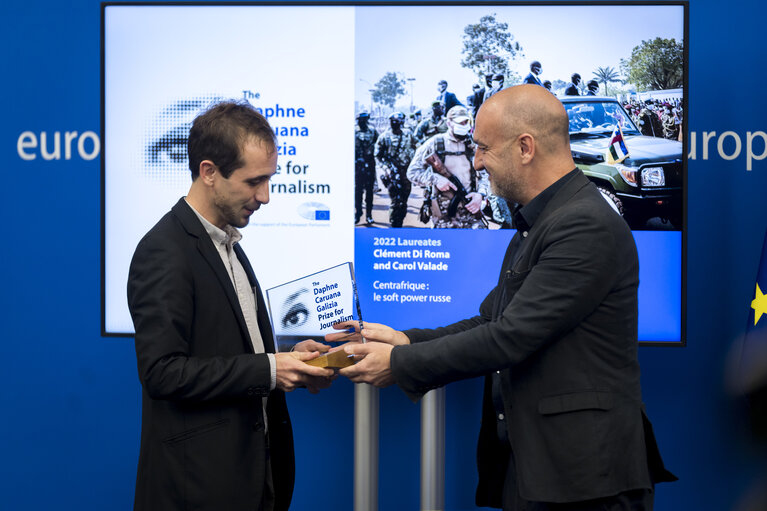 President Metsola said: “The Daphne Caruana Galizia Prize for Journalism sends a strong message. The European Parliament is on the side of truth and justice, of independent journalism.

A strong democracy needs a strong press. And there is no democracy without freedom of the press. In Europe, rights and liberties are goals we fight for, not obstacles.”

Between the  3rd May and 1st August 2022, more than 200 journalists from the 27 EU countries submitted their stories for consideration.  11 of these submissions were shortlisted by the jury before the overall winner was decided.

Clément Di Roma and Carol Valade were presented with the award by the winners of the 2021 edition, Sandrine Rigaud and Laurent Richard, representatives of the Pegasus Project, coordinated by Forbidden Stories. 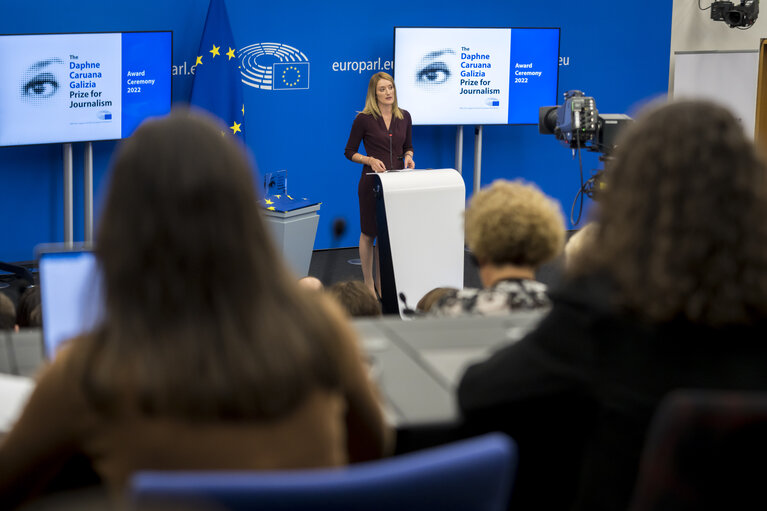 Clément Di Roma is a video and photojournalist correspondent for France24 based in Rwanda. He started in 2019 as a reporter in Senegal for Agence France Presse. From 2020 till 2022 he was based in the Central African Republic as correspondent for the channels France24 and TV5Monde. From Bangui, he covered the electoral crisis and the armed attacks of a rebel coalition against the capital Bangui. A year later, he directed with Carol Valade the winning story “the Central African Republic under Russian influence / Centrafrique : le soft power russe”.

Carol Valade has been a multi-media reporter specialising in Africa for 10 years. In 2018, he moved to the continent as a press correspondent and collaborated with RFI, AFP, TV5-Monde, Radio France and Le Monde among other international media. He traveled throughout West Africa to cover the political crisis in Guinea, the resurgence of the Ebola epidemic, investigated the massacres of the 28th September 2009, documented the adaptation to climate change and the disappearance of elephants before settling in the Central African Republic to report on the consequences of the civil war and the Russian influence that is the subject of the winning story.

About the winning story

This film is Clément Di Roma and Carol Valade’s first documentary and the culmination of their work as correspondents in the Central African Republic in 2020. The country was going through a wave of violence and abuses triggered by a new rebellion, partly fought by Wagner, a shadow army serving the Kremlin’s interests. They investigated, filmed and continued their correspondence for several international media despite the surveillance of Russian mercenaries and the prevailing hostility against the French media. It was also a question of continuing the work of their three Russian colleagues, Orhan Djemal, Kirill Radchenko, and Alexander Rasstorguyev, murdered in the Central African Republic while investigating Wagner in 2018. Their main concern has been the protection of their sources, especially those who denounce the crimes of mercenaries, in a country where disappearances of opponents are common. After several months of investigation, they gained the trust of Russian propaganda actors in the Central African Republic. Their voices had never been heard before. Without bias, their documentary gives a voice to the victims of the mercenaries, but also to their supporters, to better understand the methods of this takeover, facilitated by a resentment towards France. They wanted to make all voices heard in this other front of the conflict with Russia that is now spreading to the Sahel on both military and disinformation fields. 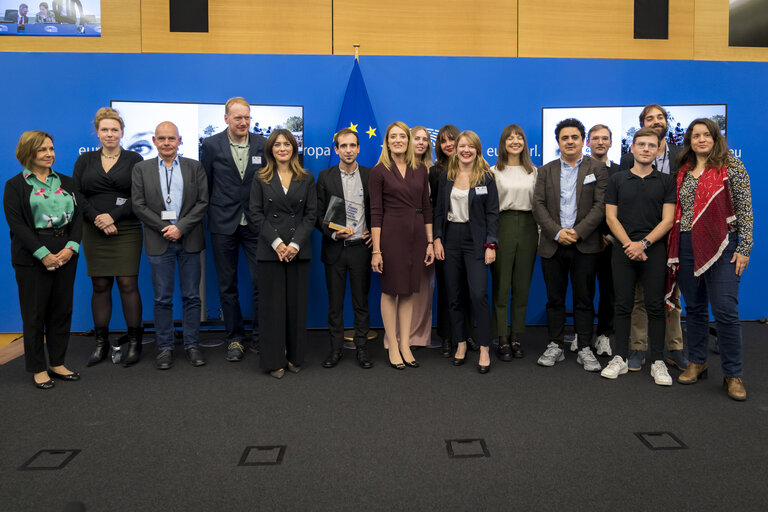 The Daphne Caruana Prize was initiated by a decision of the Bureau of the European Parliament in December 2019 as a tribute to Daphne Caruana Galizia, a Maltese anti-corruption investigative journalist and blogger who was killed in a car bomb attack in 2017.

The Prize rewards on a yearly basis (on the anniversary of the assassination of Daphne Caruana Galizia) outstanding journalism that promotes or defends the core principles and values of the European Union such as human dignity, freedom, democracy, equality, rule of law, and human rights.

The Prize and the €20.000 prize money demonstrate the European Parliament’s strong support for investigative journalism and a free press.

In October 2021, the Daphne Caruana Prize for Journalism was awarded to the journalists coordinated by the Forbidden Stories Consortium investigating the Pegasus Project.

Who was Daphne Caruana Galizia?

Daphne Caruana Galizia was a Maltese journalist, blogger and anti-corruption activist who reported extensively on corruption, money laundering, organised crime, sale of citizenship and the Maltese government’s links to the Panama Papers. Following harassment and threats, she was murdered in a car bomb explosion on 16 October 2017. The outcry over the authorities’ handling of her murder investigation ultimately prompted the resignation of Prime Minister Joseph Muscat. Critical of failings in the investigation, in December 2019, MEPs called on the European Commission to take action.

Home page of the award
https://daphnejournalismprize.eu/