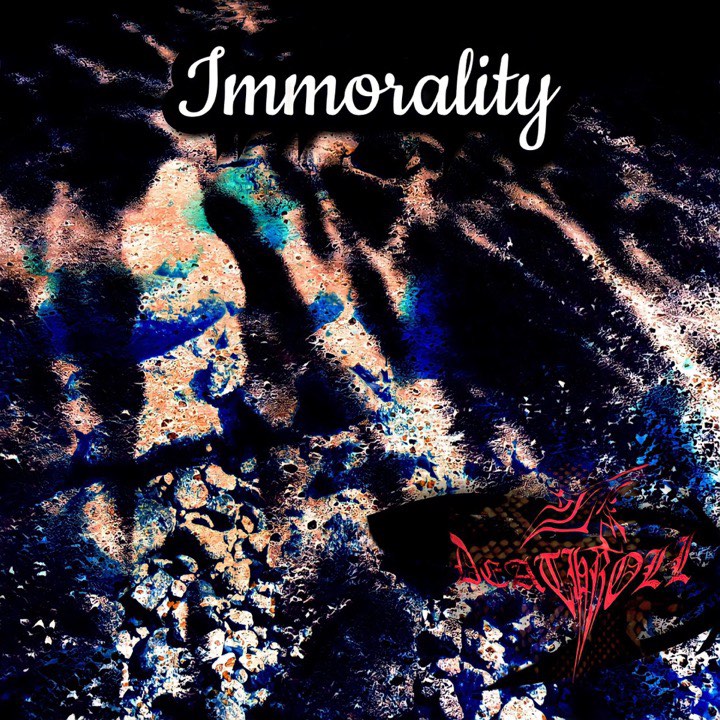 Japan has a unique metal scene that unlike any other metal scene, it gives us bands with a certain attitude. Deathroll from Fukushima is no exception in this rule. The band of Kazuya Niitsuma has created a personal sound that encompasses black metal, heavy metal and some death/thrash parts. Kazuya has also structured very personal vocals to express the anger and depression that modern world gives us. Kazuya Niitsuma is a hard worker and with this said Deathroll have released a number of albums, demos and singles.

“Immorality” is the band’s 6th album. In it Deathroll demonstrate the ability to create great songs, with simple forms, that evolve to progressive and technical schemes. Kazuya is blessed to have in the band an amazing rhythm section and this helps in building the structures of the songs and keeps the ideas flowing the right way.

“Immorality” is a blasting and heavy creation. The single “Don’t Understand The Principle Of The Thing” sounds like the perfect mix of Mayhem with devilish Morbid Angels “Altars Of Madness” riffs. “Collapse Ethics” brings on an Entombed vibe. The 90’s death metal beat-down parts are enough to increase the madness supported by Kazuya’s vocals. The production is crunchy in a complimentary way.

“Melting Happiness” groovy themes are enough to make you bang your head. Kazuya’s voice is totally evil. The overtones and hidden melodies/harmonies of the song maximize the sickness. “Hell On Earth” has a totally psychotronic and trembling off-beat rhythm just before a heavy riff and Kazuya’s punishing vocals make it another Deathroll stand-out track!

“Desolate”’s monolithic riff reminds me of Von. It has a heavy metal drape and some thrash touches. Demonic vocals create an unmatched atmosphere. The melodic phrase after the first half of the song is epic! “Obscenity Named Brainwashing” has an almost industrial rhythmic base. Atonal black metal parts are mixed with heavy metal themes in a relentlessly punishing black metal tune.

“Journey to the Underworld” is a furious metal song. The hooks are amazing in this one. The thrash/hardcore riffs twist and turn the knife deep in the wounds. Deathroll have found the right way to mix black metal with heavy metal and thrash metal. The melodies are sick. Another great moment in this excellent album!

Last song of “Immorality” is “Healing Called The Death”. It is a song with crunchy, heavy and thick riff work, and with Deathroll’s trademark sound.

“Immorality” is an authentic underground gem with rich and personal sound. If you seek for originality, Deathroll will become your favorite black metal band. Discover “Immorality” and through it Deathroll !!

Deathroll – Why is your name on the Deathroll? (Official Music Video)