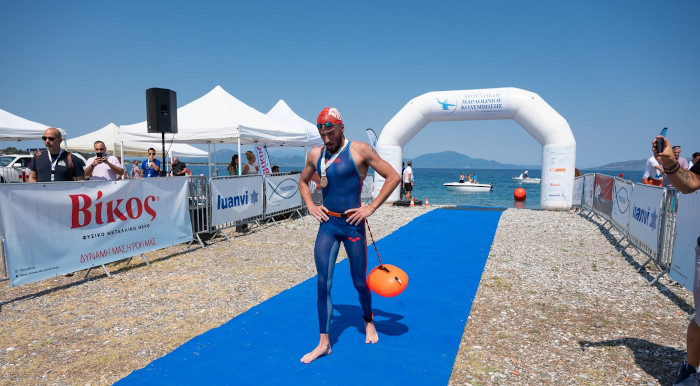 The historic swimming event of the Authentic Marathon Swim made a dynamic come back for the 3rd consecutive year, on July 1-3, 2022, at Artemision, providing participants with the opportunity to enjoy unique open water swimming routes at Pefki Evia of the Municipality of Istiea – Edipsos.

Amateur and professional swimmers from 14 countries, including among others, the United States of America (with visitors for a 3rd consecutive year), Canada, the United Kingdom, Germany and France, visited and supported North Evia on the occasion of the event, and discovered the region’s cultural and sports wealth. The Prime Minister’s representative, Deputy Minister of Rural Development & Food, Mr. Simos Kedikoglou, honored the Authentic Marathon Swim with his presence, while the Deputy Minister of Culture & Sports, Mr. Lefteris Avgenakis expressed his support for the event through his greeting.

World-class names with accolades in the Olympic Games were in attendance at Pefki Evia, offering a global magnitude to the event. After two years and his first participation, the Bulgarian Olympian and Hall of Famer Petar Stoychev with 4 participations in Olympics and 11 consecutive titles in major international open water marathon swimming FINA series visited Greece again. Moreover, the German marathon swimming Hall of Famer and world champion Christof Wandratsch, winner of many world championships, cups, and records, as well as the English Hall of Famer Kate Steels, who was named the Woman of the Year 2021 at the WOWSA Awards of the World Open Water Swimming Association, visited Greece for the first time in order to participate in the event. All three top athletes were honored by the Mayor of Istiea-Edipsos, Mr. Ioannis Kontzias.

A historic moment arrived for the Authentic Marathon Swim as the event was recognized globally by WOWSA, the World Open Water Swimming Association, and is now part of the UltraMarathon Swim Series, with only 6 other races, for the time being, from around the world.

The Authentic Marathon Swim also attracted Greek athletes who are recognized in marathon swimming, such as the open water masters’ world champion, Vicky Kouveli, the three-time Greek champion and two-time English Channel marathon swimmer, Sofia Psilolignou and the English Channel marathon swimmer, Giannis Kotsiopoulos while Greek champions such as Ilektra Lebl, Dimitris Negris, Stellina Aplanti, Panagiotis Bolanos, George Skotadis, who announced that he will be swimming with the colors of the Greek national team, as well as Olga Ntalla who returned to the event for a 2nd year, were also present.

This year’s Authentic Marathon Swim brought out many emotions and as always in demanding swimming routes, with strong sea elements had 3 unique route records. In the authentic 14.5km route “Skyllias & Hydna” crossing, which allowed swimmers from around the world to swim over the shipwrecks of the naval battle of Artemision that took place in 480 B.C., for the first time, on Saturday July 2, the athletes followed the example of Skyllias and his daughter Hydna, the very first “marathon swimmers”, according to the Father of History Herodotus (8.8) and other historians. The winner of the demanding route, in which 2,500 years ago the Persian fleet experienced major disasters, was the Greek champion George Skotadis with an amazing race that lasted 03:14’48’’, while among the women, Edie Markovich from U.S.A. finished first. In the 10km race crossing, the German Hall of Famer Christof Wandratsch finished first with 02:38’50’’, breaking the record held by the Bulgarian Petar Stoychev by 1 minute and 25 seconds, while in the women’s race, Vicky Kouveli came first. George Douvanas finished first in the 5km and Liliyana Georgieva from Bulgaria was first in the women’s category. George Arniakos finished first with a record time of 00:37’51’’ in the 3km, while Ilektra Lebl came first in the women’s category, with a record time of 00:40’13’’. Stavroula Katouni finished first in the 1.5km, while Christos Trivyzas came first in the men’s race.

Finally, hundreds of children filled the Municipality of Istiea-Edipsos with smiles by participating in the 500m children’s route that had Pefki beach as its starting and finishing point.

See here all the detailed results:

All routes were designed by the race’s top technical director, with distinctions in Olympic Games & world championships in open water swimming, Mr. Nikos Gemelos. The warm-up of the athletes was undertaken by the physical education instructor, Mandy Persaki.

The event was held with absolute safety in accordance with FINA regulations and the approval of the Hellenic Swimming Federation. The Authentic Marathon Swim provided once again everyone with a safety swimming buoy since its use by professional and amateur athletes was mandatory in all routes. For each participant in the 14.5km and 10km routes there was an escort-boat, while the lifeguards of Lifeguard Patrol were for another year next to the swimmers.

The top Greek marathon expedition team in the open water sea South Evian Gulf team, not only accompanied swimmers in the 5km, 3km and 1.5km races, but also offered lessons on the basic techniques of open water sea kayaking, while getting participants acquainted with the boats on land and then allowing them to puddle at the straits of Artemision.

In the context of the event’s 3rd year of the event, the Mayor of Istiea-Edipsos Mr. Kontzias said: “The historic podium on which the race stands, gave us encouragement from the first moment to organize this event. We always have the races’ safety as our top priority and we want our place to celebrate every time by hosting visitors, professional and amateur swimmers, and those who want to swim in the waters of Artemision and be part of this celebration. Our Municipality continues to highlight the history and cultural heritage of the place through the Authentic Marathon Swim and its actions. I would like to warmly thank the entire Greek state, the Region of Central Greece, the Regional Union of Municipalities of Central Greece as well as all the sponsors who stood by us in this effort to rebuild the place. We look forward to seeing you all next year”.

The protection of the environment is a priority

Sports as a physical human activity needs a healthy natural environment. In the context of the Authentic Marathon Swim, the event collaborated for the second year with the Civil Non-Profit Company p3=Plastic Pollution Prevention for the protection of the natural landscape in Pefki and the environmental information of the athletes and all participants. The plan that was designed and implemented had the reduction and management of waste, the recycling of over 80% of the plastics used, the zero consumption of paper, the reduction of water consumption, the reduction of pollution from transportations, the information and awareness of athletes and spectators and the conservation and protection of local biodiversity as its goals. Pefki beach was cleaned by the event’s volunteers’ group, while throughout the three days all plastic packaging was collected in designated recycling bins and was promoted for reuse.

The Authentic Marathon Swim collaborated once again with the Sports Management Society of the leading private educational institution in the country, Deree – The American College of Greece, investing in research and collection of important data about the financial footprint of sports tourism in North Evia. During the races, a survey was conducted on participating athletes and visitors of the region, the results of which will be presented in the coming months.

On Friday, July 1, the Authentic Marathon Swim, honoring the history of the place, held a symbolic event at the ancient settlement of Artemision where Mavroelia from Artemision, which is also known as Olive Mavromandila, can be found. It is a monument of nature and local history, one of the oldest olive trees in the world, dating back over 2,500 years. Winners of the routes were symbolically awarded with a branch of Mavroelia.

The Athens Concert Hall traveled to North Evia in an effort to contribute to its cultural revitalization. As part of the “Bridges of Music” events, on Friday July 1 a concert was held at Pefki, by the band of the famous Greek composer and bouzouki master Thanasis Polykandriotis. The event was part of the “Artemision 480 BC” Authentic Marathon Swim.

During the three-day event, an exhibition of local food products and tasting was held in collaboration with Evia’s Federation of Trade and Entrepreneurship “Evia Epichirin”.

NP Insurance and Philosofish were the event’s Official Sponsors.

The Authentic Marathon Swim was held under the auspices of the Ministry of Tourism and the Greek National Tourism Organization with the approval of the Hellenic Swimming Federation. The event joined the Greek actions of the #BeactiveHellas 2022 program of the European Commission which is held under the auspices of the General Secretariat of Sports.

With the event’s hashtags #authenticmarathonswim and #visitnorthevia, the Authentic Marathon Swim sent a strong message on social media about the uniqueness of North Evia and the need for people to support and visit the Municipality of Istiea-Edipsos. 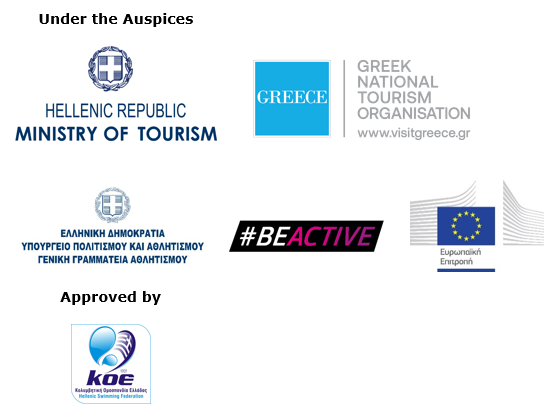