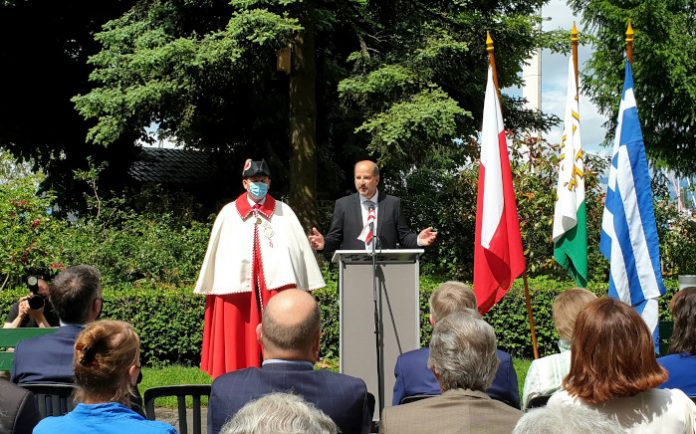 On Saturday, the 5th of June, the swiss city of Lausanne officially christened the allée Kapodistria in Ouchy, where a bust of Ioannis Kapodistrias was unveiled in 2009. The event was attended by Greek and Swiss diplomats, including the Greek ambassador to Switzerland, Ekaterini Xarogari, Mrs Ydreou, the Mayor of Corfu and the Mayor of Athens, Costas Bakoyannis.

Reflecting on this event, as a Greek, is harder than it may seem.

There is of course no doubt that Kapodistrias—or, Count Capo D’Istria, as he is sometimes known, was and remains a role model for Greeks; that is also what Mr. Bakoyannis stressed in his speech.

When international parties speak of him, it is less to highlight his role as Greece’s “father” and first prime minister, and more to stress his genius as a politician and a diplomat who changed many, many lives.

For instance: speaking at the event, Grégoire Junod, syndic of the city of Lausanne, said “The people of Vaud can forever be grateful to Kapodistrias, because they did not fall back under Bernese yoke thanks to him”. With these words, he essentially summarizes one of the great statesman’s other achievements: creating a modern Switzerland, and using his considerable diplomatic prowess to make great powers accept it, even protect it, at the Congress of Vienna in 1815.

A garden is such a small thing by which to celebrate the life and work of a great statesman, but the words of two politicians from different countries that still owe so much to the same man? Those give credence to Thucydides’ words– “Ανδρών επιφανών πάσα γη τάφος” (Any land will be the grave of great men).