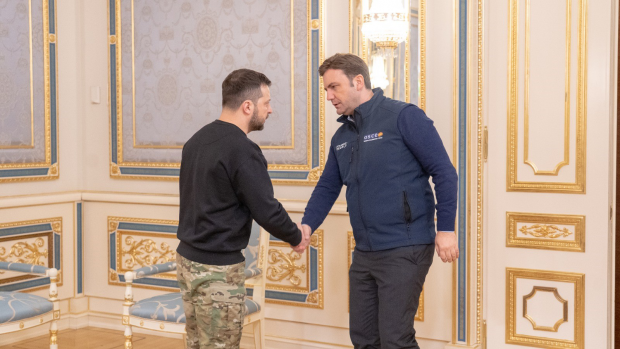 During his visit, Chairman Osmani observed first-hand the terrible toll Russia’s senseless and unjustified war continues to have on the people of Ukraine and called on the Russian Federation to immediately end the aggression.

This is the first official visit by Minister Osmani as OSCE Chairman-in-Office since North Macedonia began its Chairpersonship on 1 January 2023.

“I am here today to reiterate our strong support for Ukraine and to convey a firm message; the Russian aggression against Ukraine is unjustified and unprovoked. In our capacity as OSCE Chairpersonship we will continue to offer OSCE assistance and support in these challenging times,” Osmani said.

During his visit Chairman Osmani met the President of Ukraine Volodymyr Zelenskyy, the Speaker of Verkhovna Rada of Ukraine Ruslan Stefanchuk and Foreign Minister Dmytro Kuleba.

“The grit and bravery of Ukrainian women and men, in the face of this calamity deserve our utmost admiration and respect. Ukraine will be a top priority for our Chairpersonship. Being here today demonstrates our commitment and we will not waver. We cannot and will not merely accept what is happening. Instead, we will engage and use the OSCE toolbox to actively seek a way to restore peace and the full respect of our principles and commitments,” he added.

Chairman Osmani emphasized the OSCE’s continued role in Ukraine and asserted that the Organization will remain engaged and committed to assisting the country in these unprecedented times.

“Once peace is restored and Russia has withdrawn its forces from Ukraine’s sovereign territory, the OSCE will be able to offer its full toolkit to help Ukraine recover from the wounds of this war. The OSCE helps now during the war through the donor-funded Support Program for Ukraine, but it will do even more during peace,” Osmani said.

On 1 November 2022, a new donor-funded Support Programme for Ukraine was launched by contributing OSCE participating States.