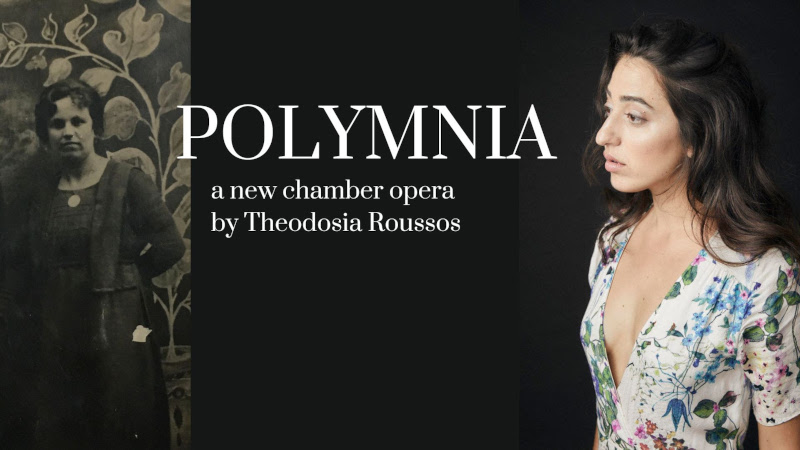 The UCLA Stavros Niarchos Foundation Center for the Study of Hellenic Culture is thrilled to announce it has been approved by the National Endowment for the Arts (NEA) to receive a Grants for Arts Projects award to support Polymnia.

“The National Endowment for the Arts is proud to support arts projects in communities nationwide,” said NEA Chair Maria Rosario Jackson, Ph.D. “Projects such as this one with the UCLA Stavros Niarchos Foundation Center for the Study of Hellenic Culture strengthen arts and cultural ecosystems, provide equitable opportunities for arts participation and practice, and contribute to the health of our communities and our economy.”

We hope you will join us at UCLA’s Little Theater to see Polymnia, described by Opera News as “haunting and beautiful.” Our Saturday premier is sold out! We have added a second show on Sunday, January 22 at 2:00pm!

Polymnia, a chamber opera composed by UCLA alumna Theodosia Roussos, is a debut experimental chamber opera that tells the story of a woman who responds with resilience to war and trauma and relates how her experience echoes across generations and communities. Drawing from fragments of Sappho’s poetry, Kassiane’s hymns, as well as four generations of private family writings and oral history, composer and performer Theodosia Roussos shares the story of her great-grandmother Polymnia Athanasiadis Pappas, a young woman whose family was expelled from its village by the Ottoman Turks during the Asia Minor Catastrophe. Roussos draws influence from her Greek Cypriot American background and weaves elements of Byzantine and Greek folk music into the score.

Presented in both Greek and English, Polymnia reveals the very personal and also political experience of diaspora—what is lost, what is retained, and what cannot be forgotten.

This event is being held under the auspices of the Consulate General of Greece in Los Angeles and is made possible thanks to generous support from the Stavros Niarchos Foundation (SNF) and the National Endowment for the Arts (NEA).