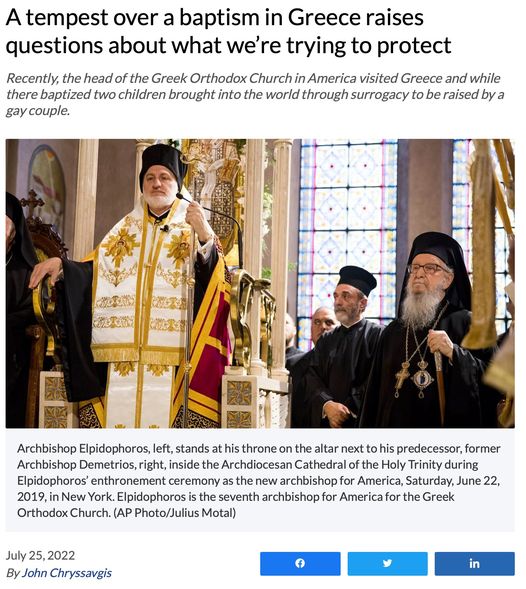 Opinion by the Rev. John Chryssavgis:

Earlier this month, a storm — unwarranted, malevolent — brewed up after Archbishop Elpidophoros of America, the head of the Greek Orthodox Archdiocese of America, visited Greece and while there baptized two children brought into the world through surrogacy to be raised by a gay couple.

As is customary, Elpidophoros informed the local bishop, Metropolitan Antonios of Glyfada, that he was coming to perform a baptism in his diocese. He did not, however, bring up the nature of the children’s birth or the sexuality of the parents. By last Tuesday (July 19), the Greek Church had vowed to file a complaint to Ecumenical Patriarch Bartholomew in Istanbul, and social media was aflame with discussion.

Clearly, this is not a debate about sacramental grace.

What happened was simply another baptism, but what ensued was something everyone in the world of faith is familiar with of late: Another episode in the culture wars.

It also revealed how out of touch the Orthodox Church is with reality and the world.

We observed it in the response to COVID-19; we witnessed it in the defense of Russia’s war on Ukraine. A mere glance at tabloids and blogs reflects how the Orthodox Church lives in its own bubble. There, we excel in ostentatious rituals and flamboyant vestments.

There are certain topics that Orthodox Christians are singularly uncomfortable broaching. Most prominent among these is homosexuality, which arouses much passionate emotion but little rational discourse. Simply regurgitating the catchphrase that we “loathe the sin but love the sinner” can often be condemnation masquerading as compassion — it is, after all, easier to label than to listen.

We ought to take a lesson from the saints, whom we more often idealize than imitate. St. Porphyrios, who lived from 1906 until 1991, is known for being so “wounded by love” for God that he went to sanctify “a house of ill fame” near Athens’ Omonia Square by offering the inhabitants the chance to venerate the cross. When he was reminded where he was, Porphyrios declared the prostitutes “in a better spiritual state” to embrace the cross than many others.

Was he condoning prostitution when he “felt a sense of joy and … honor” as he blessed those women?

There should be no controversy over a baptism, to which all children are entitled. Why then has Elpidophoros’ action caused such contention and accusation? When an independent church reaches out to the ecumenical patriarchate about what transpired, I have to wonder what exactly our fears about this event conceal.

Are we afraid that tradition or truth might be diluted? Are we perhaps afraid of unraveling a seamless fabric? Yet the historical church never shunned difficult debates in councils over centuries, even — and especially — when it came to contentious and complicated issues like Christ’s gender (or flesh) and the significance (or style) of depicting the holy.

Are we afraid of opening Pandora’s box? Should the metropolitan of Glyfada have been more informed about what happens in his diocese? Or is there another reason why he scrambled to wash his hands and cover his tracks? He admits he wouldn’t have the courage to decide had he been provided all the information.

Should Archbishop Elpidophoros have clarified in writing that the children baptized do not belong to what the metropolitan of Glyfada calls “a traditional family”? Do we expect the same for children of single parents? What happens in the case of atheist parents? What of parents who undergo civil marriage or are not married at all?

In such cases, do we impose any limitations on photography or publicity, as has been suggested in this case?

Are we afraid of being too close to “sinners” or possibly contaminated by sin? The metropolitan of Piraeus ignored a similar baptism in central Athens some years ago; but he was discomfited by the recent baptism in a neighboring diocese. Too close for comfort? Once asked whether there were any gay Orthodox, he allegedly replied that, if “sodomites” exist in the church, “we must distance such sick people from others.” How would the metropolitan respond if asked whether there are gay bishops in the church?

His opinion, however, is of little consequence because he also lambasts international Zionism and Jewish bankers, the pope and all heretics. He once admonished Turkish President Erdoğan to convert to Orthodoxy or else face eternal hell with Muhammed. I think the good metropolitan might be surprised to see who, as it says in the Gospel of Matthew, “precede you to the Kingdom of God!”

Are we afraid of admitting our own discomfort or embarrassment in discussing sexual principles or practices? Could it be time for a frank discussion about sex and gender in the church? Should those prone to deprecating the lifestyles of others — whether consecrated bishops or compulsive critics — “first take the log out of your own eye, and then you will see clearly to take the speck out of your brother’s eye,” as Jesus said?

The role of Orthodox Christians cannot be reduced to either expectation of a separation of sheep from goats or renunciation of a sinful world by detachment from all things secular.

I am aware of two mainstream texts that dare to consider homosexuality in a sustained, respectful and pastoral manner. The first is a “Letter from the Orthodox Bishops in Germany to Young People concerning Love, Sexuality, and Marriage,” signed by Metropolitan Augoustinos of Germany in 2017 as chairman on behalf of the Orthodox Bishops’ Conference in Germany. The second is a document entitled “For the Life of the World: Toward a Social Ethos of the Orthodox Church” (2020), formally commissioned by Patriarch Bartholomew and endorsed by the Ecumenical Patriarchate.

Of course, no one readily or voluntarily admits prejudice. Everyone insists they would never “cast the first stone” — even as they are casting stones.

If we are honest with ourselves and with God — if we trust the Christian gospel and Orthodox tradition — I hope we can lay down our stones and our defenses and our fears in order to listen to and learn from one another in a spirit of healing and reconciliation.

(The Rev. John Chryssavgis is archdeacon and theological adviser to the Greek Orthodox Archdiocese of America and honorary professor at Sydney College of Divinity. The views expressed in this commentary do not necessarily reflect those of Religion News Service.)