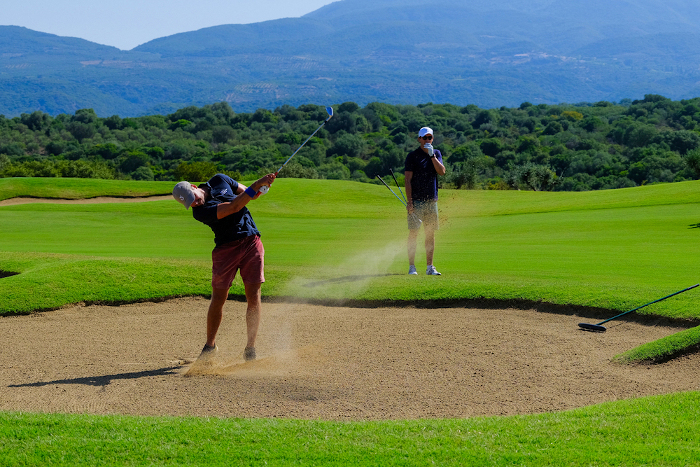 Greek Maritime Golf Event gathered more than 100 leading executives from the maritime industry for the 8th year, on September 8-11, 2022, at Costa Navarino, Messinia.

The first golf tournament at the new “The Hills Course”

The excellent weather, the maritime teams and the two new signature 18-hole courses, composed the impressive scenery for the games of this year’s tournament, which was also the 1st to be held on the new The Hills Course. The event’s new competition format found participants competing in a two-day shotgun scramble, with the first round taking place on Friday, September 9 at The Hills Course and the second on Saturday, September 10 at the International Olympic Academy Golf Course. The golfers competed in an idyllic landscape full of centuries-old olive trees with stunning views of the Ionian Sea, the historic Bay of Navarino and the picturesque port of Pylos. Accordingly, non-golfers attended a golf clinic on Saturday, September 10 at The Dunes Course.

Greek Maritime Golf Event supported this year through its actions the Non-Profit Company HOPEgenesis. On Saturday, September 10, during the prize giving ceremony, participants had the opportunity to contribute with their desired amount by taking part in raffles for significant lottery prizes. The total amount that was collected, which broke every record from any other maritime golf tournament ever held, was given to the Non-Profit Company HOPEgenesis that operates in the health and social welfare sector, which aspires to reverse the trend of declining birth rates in Greece with the aim of providing complete medical care to women, from the moment they become pregnant until the day that will give birth. For more information about HOPEgenesis: www.hopegenesis.org

The awards night was presented by the EuroLeague legend Joe Arlauckas, who also competed in the tournament. At the same time, during the event, rich prizes were raffled off to the participants, being offered by the following Auction Partners: Karnabakos, The Westin Resort Costa Navarino, The Margi, Arifakis Menswear, Iliada Sunset Suites, Namaste Boutique Apartments, Afanos Guesthouse and OKIO Restaurant.

Cuban cigar with a Greek name

The raffle was also enriched with two unique items from the top designer Karnabakos. A handmade humidor and a handmade ashtray of significant value, which came along with a collection of Habanos Cuban cigars. After a decade, a handmade Cuban cigar was presented for the first time in the Greek market in collaboration with Habanos, bearing the Greek name “Homer”. This is a limited edition released only in Greece. Participants had the opportunity to buy them and win exquisite gifts.

On Friday, September 9, the event greeted its participants at the Welcome Cocktail by Marine Tours, under the lounge music and unique cocktails of Grey Goose. People were welcomed by the CEO of Marine Tours Group, Mr. Konstantinos Oikonomou, a company with more than 40 years of history and high expertise in Marine & Offshore Travel and Corporate Business Travel.

During the tournament, participants and visitors had the opportunity to admire the car models of Spanos Luxury Cars, the event’s Official Mobility Sponsor.

In the context of this year’s event, the recognized Greek PGA golfer and organizer of the Greek Maritime Golf Event, Mr. Thanos Karantzias, said, among other things: “The Greek Maritime Golf Event has succeeded in the last eight years in winning the trust of the maritime industry and beyond. It is very important for us to see the continued support of the sponsors and all members of the maritime community in this tournament, and we wish to thank them very much for always being there for us. We managed for one more year to highlight the golf tourism of Messinia by organizing a tournament of high standards, in a beautiful destination, contributing to a good cause. I would like to thank those who participated and supported the top maritime golf tournament with their presence. We are now renewing our appointment for 2023”.

The event was held under the auspices of the Ministry of Tourism and the Hellenic Golf Federation. Greek Maritime Golf Event was organized by Birdie Events, through an initiative of the recognized Greek PGA golfer, Mr. Thanos Karantzias. The tournament is addressed exclusively to distinguished executives of the Greek maritime community.

In the overall team standings, the team of Webster, Pappas, Nairn, Rogers won the 1st place. The first-place team was awarded by Mr. Theo Xenakoudis Chief Commercial Officer / Managing Director, Piraeus-Greece of IRI/The Marshall Islands Registry, internationally recognized for its outstanding customer service and high-quality fleet. Second place went to the team of Robertson, Maniatis, Piperas, Harvey, while the team of Kulikov, Nekrasov, Vasilyev, Koleda took the third place. In the other categories, two more special awards were given. Specifically, Paul Harvey won the “Closest to the Pin” award and Wooldridge Matthew the “Longest Drive” award. All the winners were given rich gifts by Hellenic Grocery and Messinian Spa. The winners of the “Closest to the Pin” and “Longest Drive” categories were given a Golf Bag and a Driver Club respectively, offered from the company Pages.

Greek Maritime Golf Event was attended by some of the most significant maritime companies from Greece and Cyprus, as well as various other important companies that supported the event.

DNV, Arrow Hellas and Marine Tours were the Silver Sponsors.

Under Armour was the Official Clothing Partner.