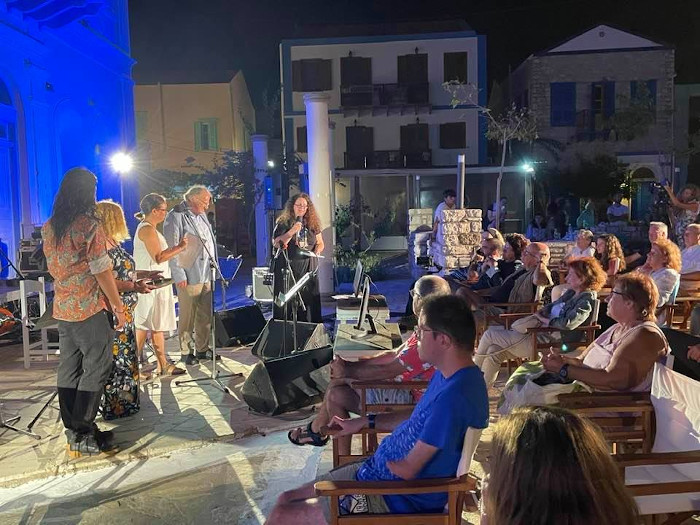 6th “Beyond Borders”: The Closing Ceremony

The documentary “Midnight Traveler” produced in the USA, Qatar, Canada and the United Kingdom in 2019, won this year’s Best History Documentary Award of the 6th “Beyond Borders “ International Documentary Festival of Castellorizo Island, which came to a close on the evening of Sunday, August 29th at the edge of the Aegean.

“Midnight Traveler”, directed by Hassan Fazili and Emelie Mahdavian, presents the struggle, difficulties and dangers faced by Afghan director Hassan Fazili fleeing abroad with his wife and two daughters when the Taliban had put a bounty on his head.

In its reasoning, the jury of this year’s 6th International Documentary festival of Castellorizo ​​points out “the highly personal documentation of his family’s escape journey from Afghanistan to Europe, revealing moments of fear, love, anger and hope, introducing a perspective of daily life which has rarely seen before. This film shows history in the making, in a region of ongoing conflict”.

Best Socio-Political Documentary Award was won by the film: “The Patriarch’s Room”, by Danae Elon, produced in Canada in 2017. The film deals with the story of the Greek Orthodox Patriarch of Jerusalem Mr. Irenaios, the deposition from his religious office, what followed and preceded the decision that provoked various reactions in the Orthodox Church.

The jury in its reasoning emphasizes “…the remarkable investigation revealing the conspiracy of men of power and excelling in a very elaborate, cinematographic and entertaining narrative”.

Dafa Metti (Difficult) by Tal Amiran, produced in 2015, United Kingdom won the award for Best Short Length Documentary. The film was praised for its original way of showing the dark side of life of immigrant street vendors against the glittering lights of Paris.

The above three awards have been instituted by the Greek Parliament.

“Golden Dawn: A public Affair” by Angelique Kourounis, produced in 2021 won Best Greek Documentary Award (courtesy of the Greek Film Center). The documentary was awarded for persistingly showing the five years of successful fight for the victims of fascism in Greece, setting an example on how personal engagement can protect our democracies.

“My Personal Lebanon” by Theo Panagopoulos, produced in 2020, United Kingdom won the Special Award “Odyssey” (courtesy of the General Secretariat for Greeks Abroad and Public Diplomacy of the Ministry of Foreign Affairs)

Special mention from the Jury was obtained by the film: “High Maintenance”, by Barak Heymann, produced in 2020, Israel.

All the award-winning directors and producers were offered by the organizers an exact copy of the golden wreath of Megisti, which was found in the Lycian-type carved tomb of Castellorizo ​​and is now kept in the National and Archaeological Museum of Athens.

The artistic director of the Festival and General Secretary of the Hellenic History Foundation (IDISME) Irini Sarioglou warmly thanked, in her speech, all those who worked hard this year to achieve the goal, which was to organize a well-rounded and complete festival. She extended her gratitude to the President of the Republic, Mrs. Katerina Sakellaropoulou, who put this year’s event under her auspices, actively supporting this cultural institution that aims at the spiritual rebirth of Castellorizo, the promotion of its history and traditions. She also warmly thanked the members of the five-member jury for their cooperation as they had a very difficult task, considering the high level of all films in competition.

Heike Dettmann, representative of the Embassy of the Federal Republic of Germany in Athens stressed the importance and contribution of the Castellorizo ​​Documentary Festival and congratulated all the organizers.

The curtain fell for the 6th “Beyond Borders” International Documentary Festival of Castellorizo with the screening of the film: “The Cradock Murders”, directed by Michel Noll and David Forbes, produced in 2010, South Africa and France.

A concert by the music group ARGONAUTS followed. Musicians Dimitris Papangelidis, Spyros Pagistis, Dimitris Koufogiorgos and Mariliza Papadouri took the spectators on a musical journey to every corner of Greece by singing together well-known and beloved songs and compositions.