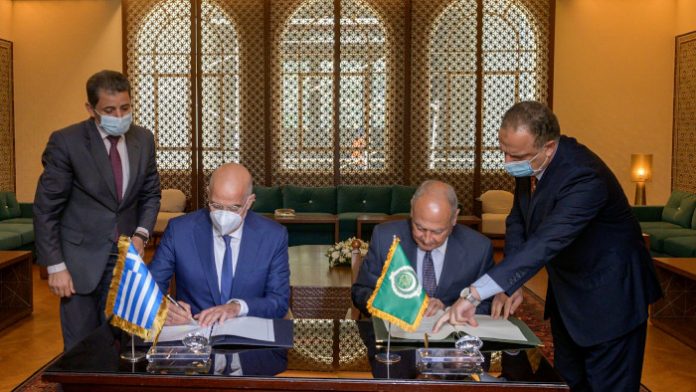 It is indeed a great pleasure meeting you for the second time in the space of a few months.

The signature of the Memorandum of Understanding today is the culmination of joint efforts.

It constitutes a basis for enhancing political consultations and even more our relations.

Between the Arab League and Greece. Also between Greece and the Arab states.

As you are aware, Greece has traditionally – and you were kind enough to mention it just a few minutes ago- held very close relations with the Arab world.

It is thanks to Arab scholars that works of Ancient Greek Philosophers became known to the West.

Greeks have thrived for centuries in the Arab world. Starting here in Egypt.

Greece always supported the aspirations of the Egyptian people for independence and prosperity.

And yesterday, I have to say here in Cairo, I had the opportunity to meet my friend, Sameh Shoukry, in Brussels.

He was invited at a breakfast at the Council of European Union Ministers.

Very close ties bind Greece with the Arab countries together.

Today’s world has evolved and so have the challenges that we commonly face.

Countries in our region, nations that do not belong to the Arab League, through their actions, constitute a very serious threat to regional stability.

They intervene militarily, either directly, or through proxies.

They seek to establish spheres of influence. Trying to revive religious empires buried in the sand of the past centuries.

And undermine the order that has been established.

Our common response should be based on our shared principles and values.

The respect for the sovereignty, independence and territorial integrity of all states in the region, including Libya, Syria and Iraq.

In this regard we call for the withdrawal of all foreign forces, including mercenaries, from these countries.

We strongly condemn acts by states that threaten or use force against their neighbours in blatant violation of the UN Charter. 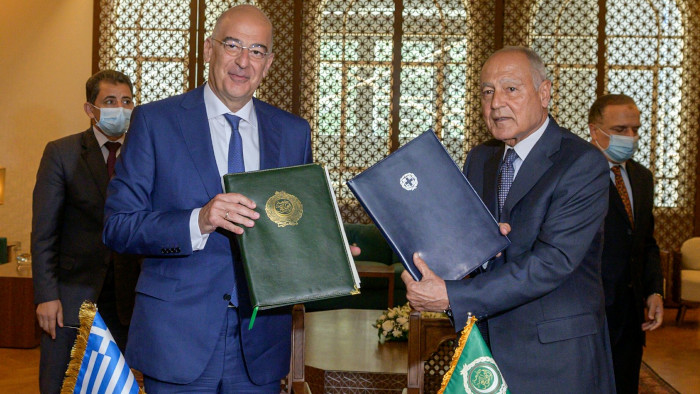 We stress the importance of the principle of the non-interference in the internal affairs of other states.

We condemn the harbouring of terrorists and extremists that seek to destabilize our region.

The memorandum we signed today is not just an opportunity to enhance relations and political consultations.

We, in Greece, believe that it opens new avenues of cooperation between Greece and the Arab States and the Arab League. And it also opens doors for other international frameworks.

Greece will try to enhance the dialogue between the European Union and the Arab League.

We will also increase our consultations and coordination in the UN bodies. And we hope that Arab states will also help us, Greece, in addressing our sensitivities in the framework of other regional bodies, such as the Organization of Islamic States.

Last but not least we strive to contribute in building a bridge of friendship between Europe and the Arab world by enhancing our bilateral ties with individual Arab states and by concluding important agreements.

Agreements that even a few years ago would seem beyond the reach of our common imagination.

By building multilateral initiatives that aim to bring countries of the region closer together. And by enhancing cooperation in key areas, such as energy, health, tourism and transport.

Today we set an important milestone in our relationship. This is not the end of the road. It is just the beginning of another.

I look forward to welcoming you in Greece and in Athens. Thank you very much for your kind hospitality.