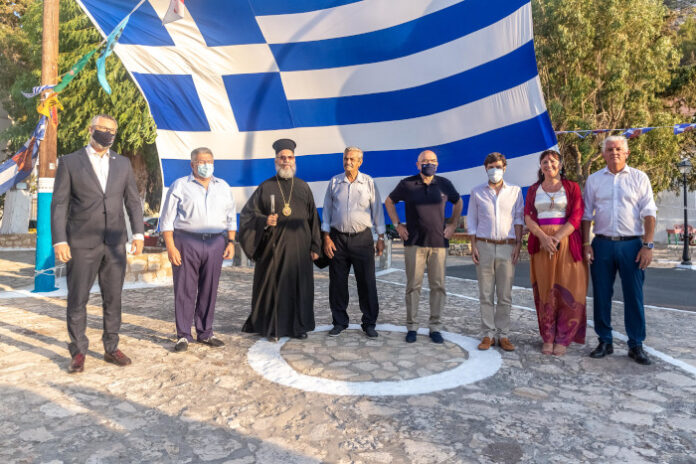 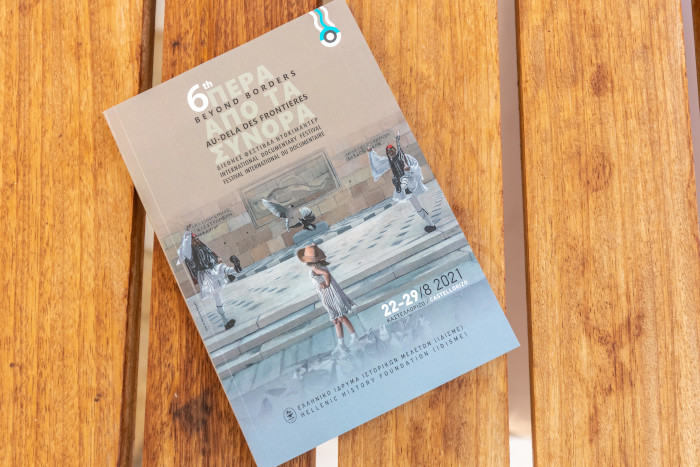 The Institute of Documentary Film (Prague) represented by Sofia Tocar (festival organizer-coordinator) was awarded as this year’s Academic Partner of Honour for its commendable and long-lasting support of experienced filmmakers.

The Festival also awarded the Hellenic Parliament TV – which was represented by Aris Fatouros (Director, Producer and TV Consultant) – as this year’s Media Partner of Honour. 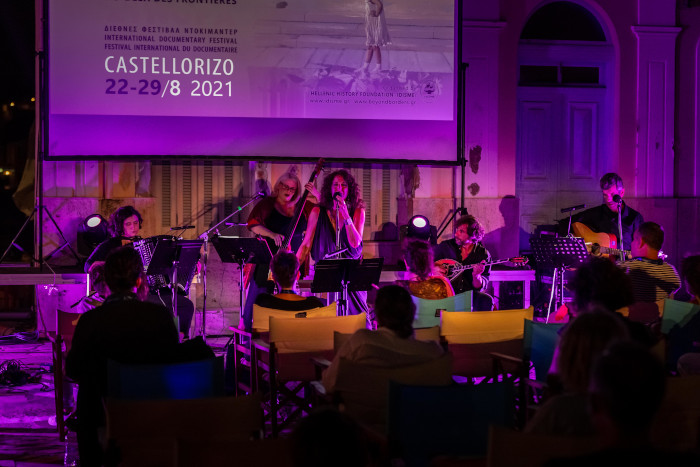 The Award for Best Greek Documentary – sponsored by the Greek Film Centre – went to Golden Dawn: A Public Affair (Greece, 2021) directed by Angelique Kourounis. The Special Award of Mediterranean Friendship –courtesy of the National Centre of Audiovisual Media and Communication – EKOME – went to “EXPRESS SCOPELITIS” (Greece, 2020) directed by Emilia Milou. The Special Award of Odyssey – courtesy of the General Secretariat for Greeks Abroad and Public Diplomacy of the Ministry of Foreign Affairs – went to “My Own Personal Lebanon” (UK, 2020) directed by Theo Panagopoulos. 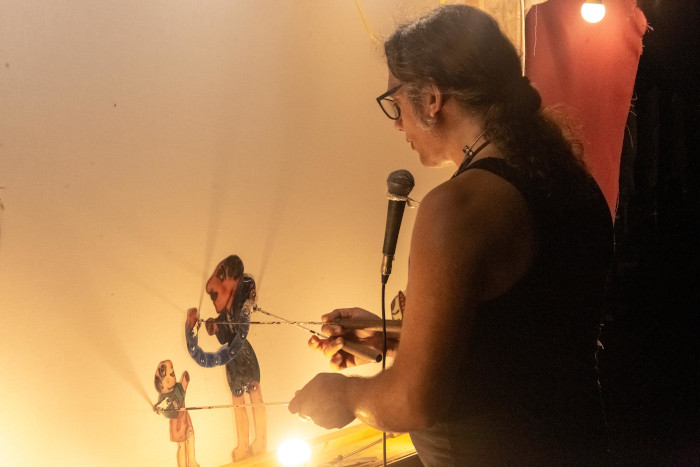 The Special Jury Prize went to the film: “A Black Jesus” (Germany, 2020) directed by Luca Lucchesi, while “High Maintenance” (Israel, 2020), directed by Barak Heymann won the Special Mention from the Jury award.

An opening ceremony with a strong emphasis on Greece’s Bicentennial

The 6th edition of “Beyond Borders” ​​International Documentary Festival of Castellorizo offered a brilliant opening ceremony to its spectators, as it put a strong emphasis on Greece’s Bicentennial. The screening of Panos A. Thomaidis’s film “Spetses ‘21, At the Crossroads of History” offered an original reading of the history of the Greek revolution, starring the descendants of insurrectionists of 1821. The concert that followed by the title “And we have on our mast forever a lookout – the Sovereign Sun!” (Odysseus Elytis) featured the great singer Morfo Tsaireli – and the composer-pianist Andreas Anagnostopoulos with whom they presented songs penned by the great Constantinopolitan Poet Dim. K. Papakonstantinou and the Nobel Prize-winning Poet George Seferis along with renowned musicians Giannis Niarchos (voice, guitar), Michalis Dimas (bouzouki), Artemis Vavatsika (accordion) and Αntonia Tsolaki (bass). 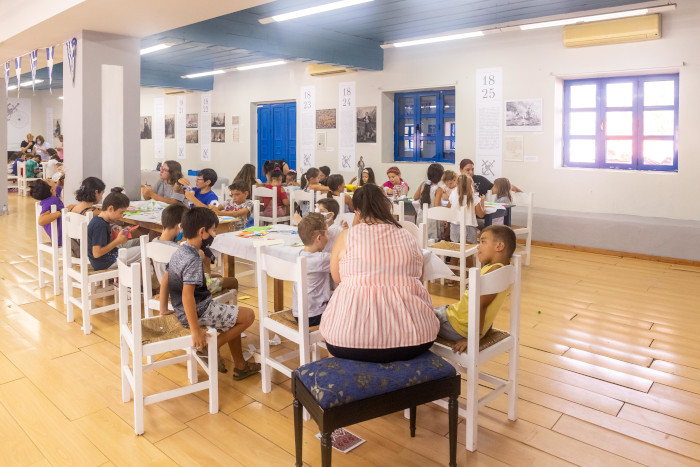 The opening ceremony was greeted and honored by the presence of the representative of the Prime Minister and Deputy Minister of Culture, Nicholas Yatromanolakis; the representative of His All Holiness the Ecumenical Patriarch Bartholomew, His Grace the Metropolitan of Simi, Tilos, Halki and Castellorizo Chrysostomos; the Deputy Minister of Foreign Affairs of Greece, Costas Fragoyiannis; the General Secretary for Greeks Abroad and Public Diplomacy, John Chrysoulakis; the Deputy Mayor of Culture Stratos Amygdalos,  the Ambassador of Australia in Athens, Arthur Spyrou; the Ambassador of Cyprus in Athens, Kyriakos A. Kenevezos; and the Cultural Affairs Officer of the U.S. Embassy in Athens, Shanna Dietz-Surendra. 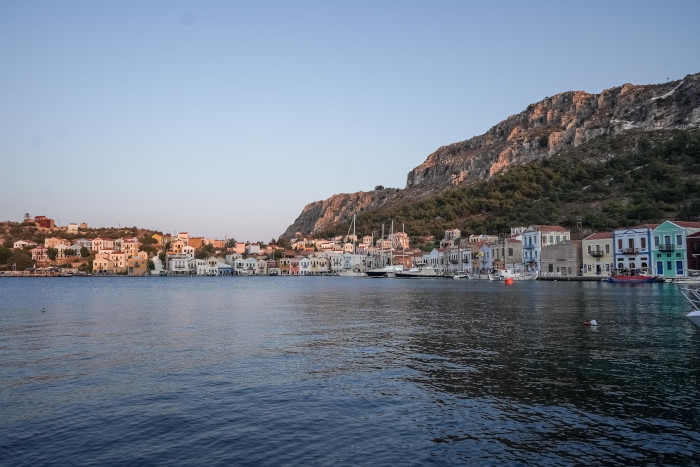 Closing Ceremony – “With Greece as Captain”

Heike Dettmann – Deputy Head of mission of the Embassy of the Federal Republic of Germany in Athens, delivered a speech, while the Director of the Italian Cultural Institute of Athens, Anna Mondavio, honored us with her presence at film screenings of the Competition section. 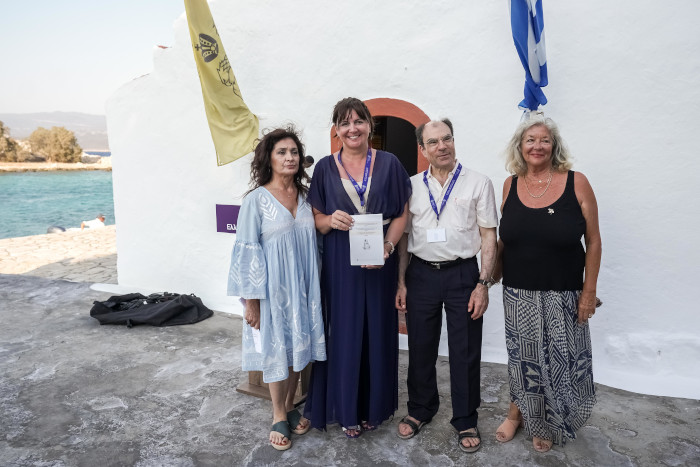 In the context of the festival three Masterclasses by BBC Storyville Editor-in-Chief and Beyond Borders ambassador, Mandy Chang, Chairman of this year’s Jury Klaus Eder and the artistic director of the Movies That Matter Film Festival Margje de Koning.  During their Masterclasses they imparted a wealth of knowledge on film criticism, on the process of making a feature documentary film, on best practices for independent filmmakers and on funding strategies for creative documentaries in the hope of guiding young up-and-coming filmmakers. 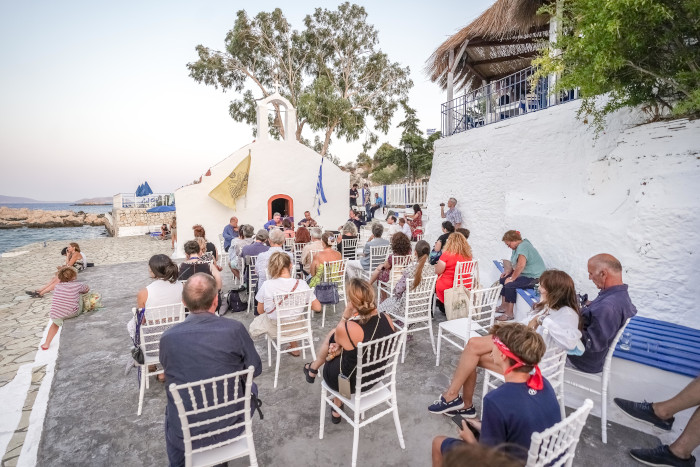 Four Pitching Lab sessions took place during the festival. They were prepared and organized by a collective of four students (Katerina Karpouzi, Antigoni Iliadou, Nikos Papachiou, Galateia Kondi) from the Film School of the Aristotle University of Thessaloniki under the guidance of Panagiotis Iosifelis – Head of the School of Film, Faculty of Fine Arts of AUTh. 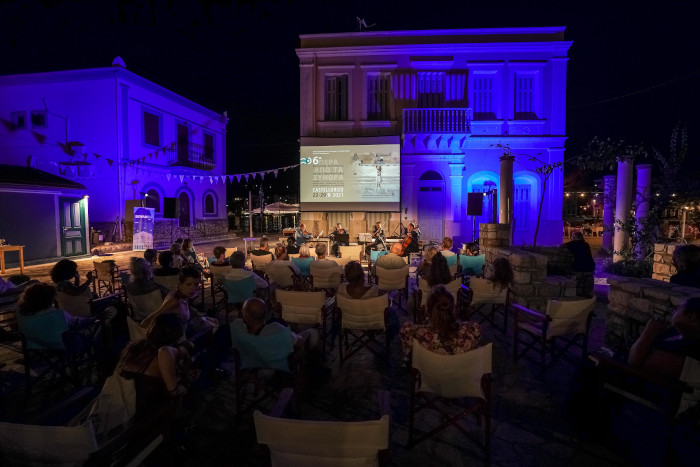 It was the first time that Beyond Borders International Documentary Festival of Castellorizo had the honor of hosting the distinguished film critic Klaus Eder.

The creation of a documentary for this unique guest was a challenge that sought to discover the human side of his character.

In collaboration with the Aristotle University of Thessaloniki, School of Film, the film will closely keep track of his visit at the island. 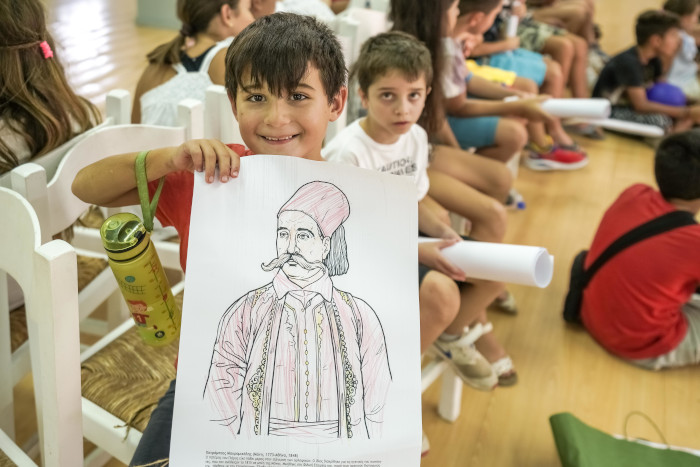 On the islet of Agios Georgios (St. George) a theatrical performance took place on August 25th on the subject of the unknown contribution of Konstantinos Polychroniadis on the propagation of the Greek Revolution. It is a recent four-language publication by the Hellenic History Foundation (IDISME) featuring pre-revolutionary texts published across the European Press of his time. Polychroniadis’s goal was to raise awareness among the European public opinion about the significance of the struggle for Independence.

The members of the Athens String Quartet accompanied the theatrical performance by presenting works from the Dodecanese suite of Giannis Konstantinidis. The talented Greek actress Georgia Anesti and the distinguished British actress and writer Carol Drinkwater read texts by Polychroniadis that had been addressed to the representatives of the great powers.

The professor and co-editor of the publication, Matteo Campagnolo attended the theatrical performance and delivered a speech. 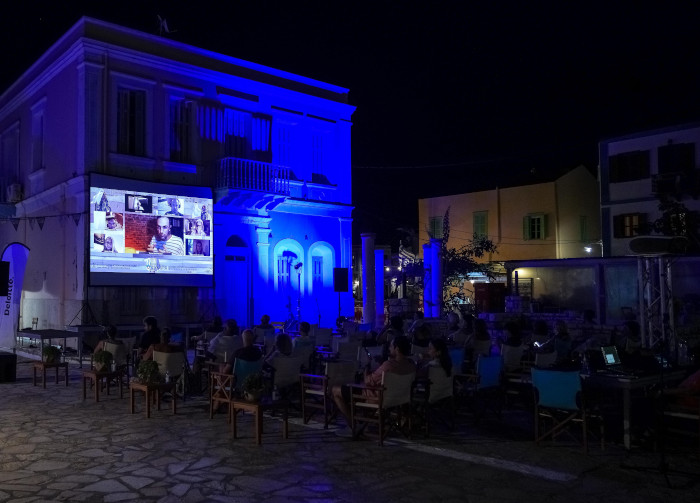 In the context of the parallel activities of the Festival a book launch was held on August 28th on the occasion of the recent publication of the Hellenic History Foundation titled “Themistocles L. Chrysanthopoulos: In the labyrinth of the Greek Diplomacy – Ministry for Foreign Affairs 1945 – 1980”

His children, Leonidas Chrysanthopoulos also an honorary ambassador and Daphne Chrysanthopoulou – Georgiopoulou, were in Castellorizo ​​and communicated their own memories and recollections of their father’s personal experiences to the attendees. 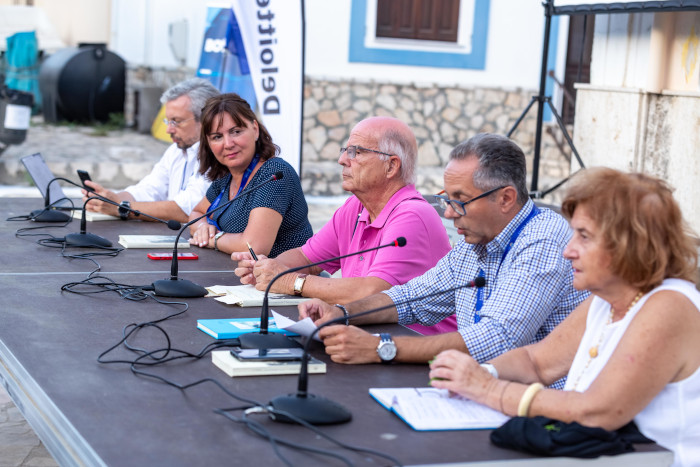 Throughout the festival, visitors had the chance to enjoy the exhibition of the National Historical Museum, “The Archipelago on Fire” that was hosted in the Municipality Hall of Megisti. The exhibition which showcased reproductions on the naval struggle of the Greeks from the Collections and Archive of Historical Documents of the National Historical Museum, was inaugurated by His Grace the Metropolitan of Symi and Castellorizo Chrysostomos representing His All Holiness Ecumenical Patriarch Bartholomew.

As part of the festival, the Municipal-Lending Library of Castellorizo was twinned with the Benakeios Library-Library of the Greek Parliament. 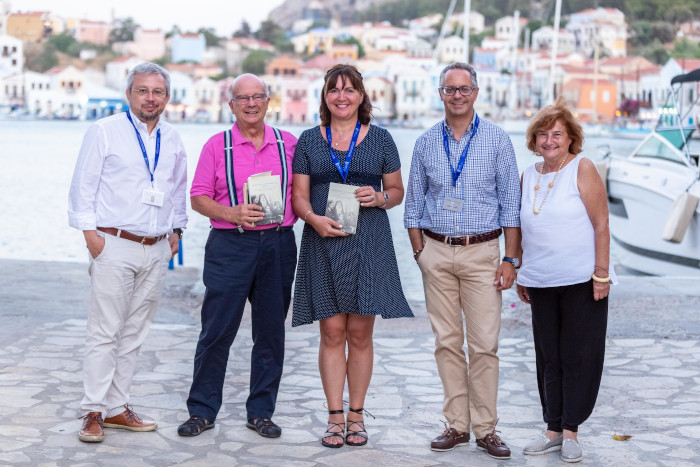 This year’s event was also interesting for the Castellorizian youth as in collaboration with the National Historical Museum and its educators Angela Vidali, Natasa Kastriti, Regina Katsimardou and Panagiota Panariti, our little friends had the chance to create their own works of art using portraits and engravings with figures and scenes from the Greek Revolution of 1821 as their reference points.

Simultaneously, through the “Fairytale Musical Journeys” of Lily Tegou and Niki Goudoumi, they were introduced to the concept of freedom and travelled to the magical world of music. Older children had the opportunity to attend Andreas Katsikoudis’s professional photography seminar titled “I love photography!” At the end of the seminar, the artworks of the students were exhibited at the Municipal Μarket of Castellorizo. 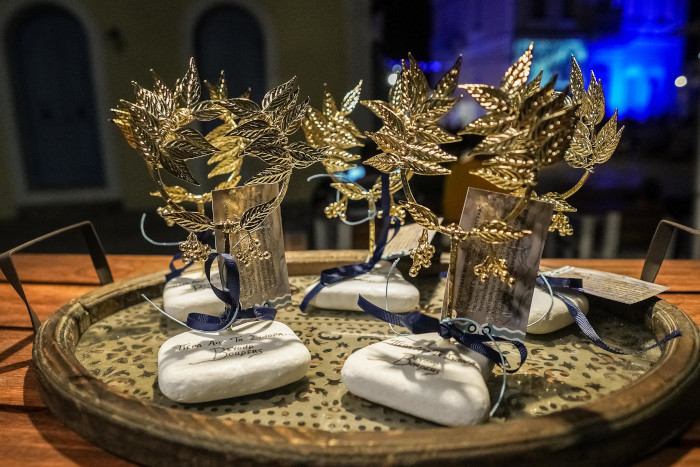 The Shadow Theater of Alexandros Melissinos inspired plenty of laughter for our little friends whereas the Clown/Magician Motzo Jojo travelled young and old alike to new magical adventures.

This year, the Athens String Quartet which consists of the leading members of the Athens State Orchestra (violinists Apollon Grammatikopoulos and Panagiotis Tziotis, violist Paris Anastasiadis and cellist Isidoros Sideris) enhanced the intervals between the screenings with live music. 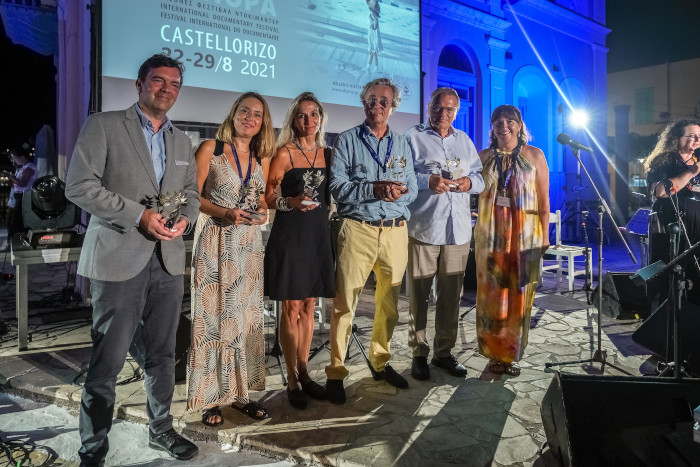 Attendance to all educational events, screenings and activities was free of charge.